Farmers from Punjab faced water cannons and broke police barriers at the state's border with Haryana as they pushed towards the national capital in protest against the centre's farm laws. 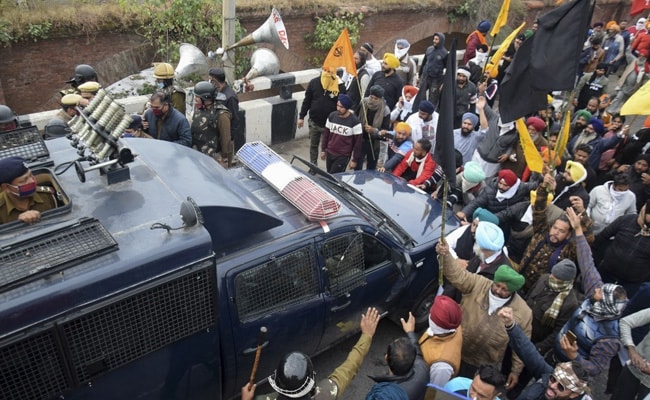 Farmers from Punjab marching towards Delhi to protest the centre's new agricultural laws first attacked the Haryana Police who acted with "great restraint", state police chief Manoj Yadava said on Thursday after a showdown after a day-long showdown between the two sides at border crossings.

"Many of our vehicles were damaged by farmers. We tried convincing them to stop their march. We did not use any force against the farmers," Mr Yadava said, adding the police would continue their efforts to stop the farmers from reaching Delhi.

"We handled the situation with great restraint ensuring law and order is maintained," he told news agency PTI.

Asked about water cannons and tear gas being used against farmers, he said farmers who entered Haryana from Punjab broke police barricades at many points.

"We are taking all necessary steps to ensure law and order is maintained. We are doing our duty," the police chief said.

Farmers from Punjab faced water cannons and broke police barriers at the state's border with Haryana as they pushed towards the national capital in protest against the centre's farm laws.

By late evening, a large number of protesters from Punjab and Haryana were close to Delhi, where too police were stationed in strength at border points.

At the Punjab-Haryana border in Shambhu, the police and farmers in their tractor-trolleys clashed for hours in the morning. The police made announcements on loudhailers asking the farmers assembled on the Punjab side to disperse.

But as protesters tried to push through barricades and threw stones, the Haryana Police used water cannons and teargas shells. Farmers flung some steel barricades into the Ghaggar river from the bridge where they had been stopped.

Ruled by the BJP which also governs at the centre, Haryana has been using heavy force to try and block farmers making their way from Punjab towards the capital in tractors and on foot for their two-day "Delhi Chalo" protest march against new laws that they fear will reduce their earnings and give more power to large retailers.