Yogeshwar Dutt later called Prime Minister Narendra Modi a "source of inspiration" in a series of tweets and pledged to serve the country. 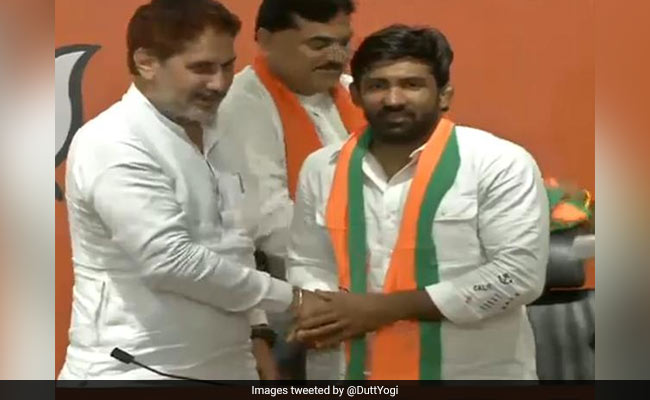 Yogeshwar Dutt may be fielded as the party's candidate in Haryana

Wrestler Yogeshwar Dutt, who won a bronze medal at the London Olympics in 2012, has joined the BJP, a month ahead of the Haryana assembly election. Mr Dutt later called Prime Minister Narendra Modi a "source of inspiration" in a series of tweets and pledged to serve the country.

"Prime Minister Narendra Modi's patriotism and integrity is a source of inspiration. The work you have done has given a new direction to politics. By joining the BJP, I have got an opportunity to serve the country," he tweeted.

"The way I have upheld the country's honour in sports, I will serve the country with the same spirit," he added.

Mr Dutt had been linked to the BJP in March before Lok Sabha polls in April-May. According to a report by news agency PTI, his name had been recommended by the BJP's state unit.

He may be fielded as the party's candidate in Haryana, which will go to polls on October 21.

Both the Sonipat and Rohtak seats, one of which may be used to launch Yogeshwar Dutt into politics, are currently held by the BJP, which won 47 seats in the 90-member house in 2014 polls.

In Sonipat, the BJP's Kavita Jain beat out the Congress's Dev Raj Diwan by more than 25,000 votes. In Rohtak, Manish Kumar Grover of the BJP edged out Bharat Bhushan Batra of the Congress by a little more than 10,000 votes.

Meanwhile, the Shiromani Akali Dal's lone MLA in Haryana, Balkaur Singh, has also joined the party. He didn't spell out the reason for the switch but said he wanted to serve the state as a BJP MLA, PTI reported.