'Our Movement is Non-Violent, Will Intensify,' Says Hardik Patel to NDTV

"I didn't use any provocative statement at yesterday's rally," Hardik Patel told NDTV.

New Delhi: The brief detention of Hardik Patel, 21, has triggered tension in Gujarat, with buses set on fire in some parts of Ahmedabad and Surat, and a curfew declared in a few sections. "Our movement is non-violent, we have not triggered any violence," said Mr Patel, who has emerged as the leader of a massive movement by the Patels or Patedars, demanding reservation in government jobs and colleges. "The campaign will intensify in the coming days," he said in an exclusive interview to NDTV.

Prime Minister Narendra Modi has called for peace in Gujarat, and said "violence does not benefit anybody."

Mr Patel's takeover of Ahmedabad was near complete yesterday. He addressed lakhs of Patels, a traditionally affluent and powerful caste, at a huge public ground in the heart of the city, and then announced a hunger strike. At 9 pm, in what is being seen as a huge misstep, he was led away by the police, which also used a lathi-charge to break up the large crowd. Cases of arson followed quickly in some neighbourhoods dominated by Patels. On a WhatsApp message last night, Mr Patel appealed for calm. 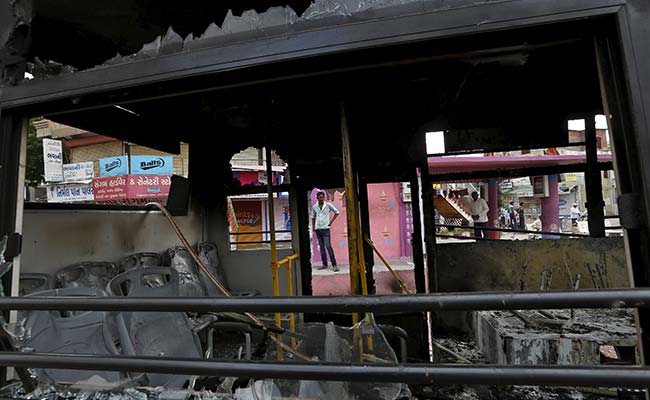 The police says Mr Patel was removed because he remained with supporters at the venue much after permission for his rally had expired.

Denying that his supporters are inflaming tension, Mr Patel said, "Despite our peaceful gathering, there was a police crackdown."

Chief Minister Anandiben has already said that the Patels cannot be added to the list of more than 100 castes that currently benefit from quotas in the state. Gujarat, she has underlined, has already hit the cap of 50% reservations mandated by the Supreme Court.

The Patels, once wealthy farmers and traders, say that because they are largely self-employed, they are being excluded from the growth curve forged by the famous Gujarat model of development. Their youth needs medical and engineering degrees, they argue, and admission in colleges has become impossible because other castes in the "reserved" category get preference.