Harbhajan Singh was flanked by Delhi Chief Minister Kejriwal and his Punjab counterpart Mann in an open vehicle. 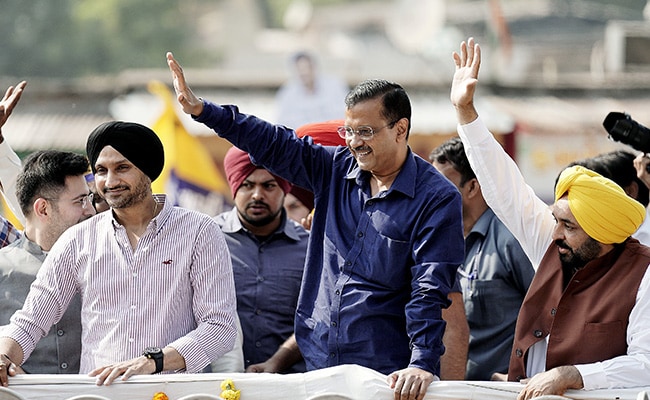 AAP is contesting 181 out of 182 Assembly seats in Gujarat.

Cricketer-turned-politician Harbhajan Singh on Thursday took part in the Aam Aadmi Party's roadshow along with senior leaders Arvind Kejriwal and Bhagwant Mann here ahead of the second phase of the Gujarat Assembly elections.

He expected the same love in Gujarat which he received as a cricketer, said Harbhajan Singh, a Rajya Sabha MP.

He also urged people to remember December 8, the date election results, if they wanted free electricity.

"Kem Chho (How are you)?...The result on December 8 should be such that it fills everyone with joy," Harbhajan Singh said.

"I hope we will be able to serve you and will be of some use to you," he added.

Harbhajan Singh was flanked by Delhi Chief Minister Kejriwal and his Punjab counterpart Mann in an open vehicle.

AAP is contesting 181 out of 182 Assembly seats in Gujarat. Harbhajan Singh and Bhagwant Mann also held roadshows at Mansa, Vijapur and Visnagar.

Bhagwant Mann said while nobody knows when the "achhe din" (good days) promised by other parties would arrive, "sachhe din (days of truthfulness)" would arrive on December 8.

"These people (BJP leaders) say there is double engine (BJP government in Centre as well as state), but when only one engine is good, what is the need for double engine? Gujarat needs a new engine, not a double engine," Bhagwant Mann said.

His government has implemented the old pension scheme in Punjab, but it is not applicable in Gujarat because more and more people are being employed on contractual basis, the Punjab Chief Minister said.

"The AAP will end the outsourcing system. There will be government jobs and lifelong pension," he added.

Arvind Kejriwal said the ruling BJP did not have any plan for the people of Gujarat.

"When you ask them what you did for 27 years, they only abuse Kejriwal. But that does not fill the people's stomachs. The stomach will be filled only when money comes into their hands and an AAP government will put money in your hands," he said.