Monsoon 2020 news: In Gurgaon, portion of a busy road caved in after nearly two days of torrential rain. The area near IFFCO Chowk has been cordoned off. 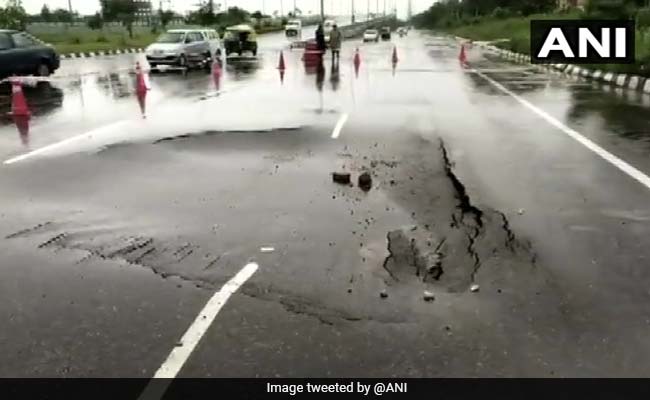 A portion of one of the busiest roads in Gurgaon has caved in after nearly two days of torrential rain. A wide area on the busy IFFCO Chowk cracked and caved in this morning. The area has been cordoned off. Gurgaon has been seeing very heavy rainfall since Tuesday night, which has caused extensive waterlogging and traffic chaos.

Massive traffic jams were seen on Wednesday due to flooding on roads. Vehicles were stranded near the underpasses on the upmarket Golf Course Road. Some areas saw waist-deep waterlogging. Visuals of a raft on a flooded road in the millennium city went viral on social media.

Haryana: A portion of road caves in near Gurugram's IFFCO Chowk, following heavy rainfall in the region. pic.twitter.com/tVQVfqEVfl

Severe waterlogging was seen even today after sharp showers in the morning on the Delhi-Jaipur Expressway in Gurgaon.

Gurugram: Severe water-logging at Delhi-Jaipur Expressway after heavy rains in the area. #Haryanapic.twitter.com/oMWTCLVema

The India Meteorological Department has predicted cloudy skies with the possibility of thundershowers till August 24 in Haryana.