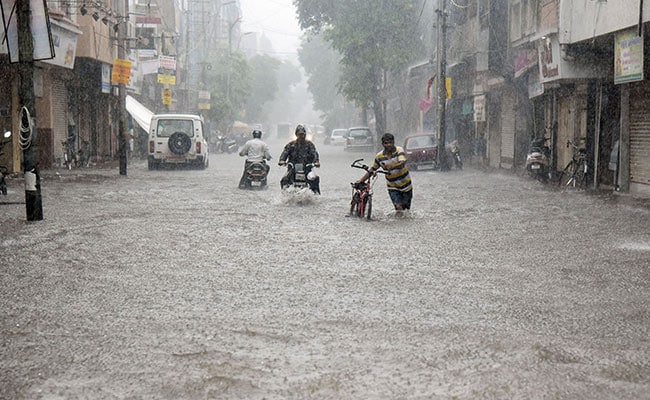 The Indian Air Force (IAF) has rescued nearly 125 people stranded on a road washed away by floods due to heavy rainfall in Kutch district of Gujarat, officials said on Monday.

After the heavy rain, a large number of people were stuck on a road washed away by flood water at Bhuj in Kutch district.

On Sunday evening, the Air Force received a request to rescue a large number of people stranded on a road that was washed away at a causeway near Hajipir dargah at Bhuj in Kutch district, a defence official said.

"The South Western Air Command (SWAC) responded swiftly and sent a Mi17 helicopter from Jamnagar. The helicopter took three shuttles and rescued 125 people. They were shifted to a safer location, he said.

The area is located near the India-Pakistan border.

The region was flooded due to heavy rains following which around 300 people, mostly workers of a factory and their family members, were stranded.

Later, the district administration sought help of the IAF to rescue the remaining people, he said.

The IAF helicopters were also used to rescue flood-affected people from Navsari in south Gujarat and Jamnagar in last few days, a defence release said.

"The operation began on August 4 when two helicopters were deployed to rescue 45 people, including women and children, from some flooded areas of Navsari," it said.

Rescue missions were also undertaken in Jodia and Pittar areas near Jamnagar where two Mi17 helicopters were pressed into action to rescue 29 stranded people, it said.

Nearly 31 died in rain-related incidents in Gujarat in the last four days.

Fishermen have been advised not to venture into the sea for next two days in view of the rough weather.