Gujarat Votes On December 1, 5; Result On 8th Along With Himachal's

Gujarat Election 2022: Chief Election Commissioner Rajiv Kumar started his interaction with the media with a tribute to those killed in the Gujarat bridge tragedy.

Gujarat Election: The results for the election will be declared along with that of Himachal Pradesh polls

The high-voltage Assembly election in Gujarat will be held in two phases, on December 1 and December 5, the Election Commission announced today. The results for the election will be declared, along with that of the Himachal Pradesh polls, on December 8.

The much-awaited announcement came against the backdrop of the recent bridge collapse in Morbi that left 135 people dead. In fact, Chief Election Commissioner Rajiv Kumar started his interaction with the media with a tribute to those killed in the horrifying tragedy.

According to the Election Commission's schedule, the gazette notification will be issued the day after tomorrow and November 14 is the last date to file nominations to contest the polls. The last date for withdrawing nominations is November 17. While 89 seats will go to polls in the first phase, 93 will vote in the second.

The poll panel shot down allegations that the poll was delayed, saying that the tenure of the current Assembly ends on February 18 next year. Several factors, including weather, were taken into account before finalising the dates, Mr Kumar said.

The Chief Election Commissioner also responded to allegations of EVM tampering. "Actions and outcomes speak louder than words. At times, parties critical of the commission have got surprise results in elections. Some have questioned EVMs, but they are silent when they win elections through the same EVMs," he added.

Gujarat is set for an exciting poll contest that may turn out to be a three-cornered fight with the entry of Arvind Kejriwal's Aam Aadmi Party (AAP) in its political landscape.

The BJP, which has been ruling the state for nearly 25 years, is on the backfoot after the aftermath of the Morbi bridge collapse revealed glaring lapses, putting the Bhupendra Patel dispensation on a sticky wicket.

The AAP, buoyed by its thumping win in Punjab earlier this year, is pushing hard to emerge as a key player in Gujarat this time after its earlier attempts yielded little success.

The 2017 state polls had seen the Congress dent the BJP's performance by putting up its best show in decades. The ruling party, however, still managed to retain power.

This time, the Congress also faces a challenge from the AAP, which has launched an extensive campaign starring Mr Kejriwal and other senior party leaders. Leaders of the grand old party, however, have said they are confident of a victory and that its door-to-door campaign has received good response. The party has warned voters against AAP and the Asaduddin Owaisi-led AIMIM, calling them "B teams" of the BJP.

The ruling BJP, however, still has the advantage of a formidable election machinery and a wide support base. Gujarat polls is also a prestige battle for Prime Minister Narendra Modi and Home Minister Amit Shah and the BJP will leave no stone unturned to ensure that it clinches victory in the state. 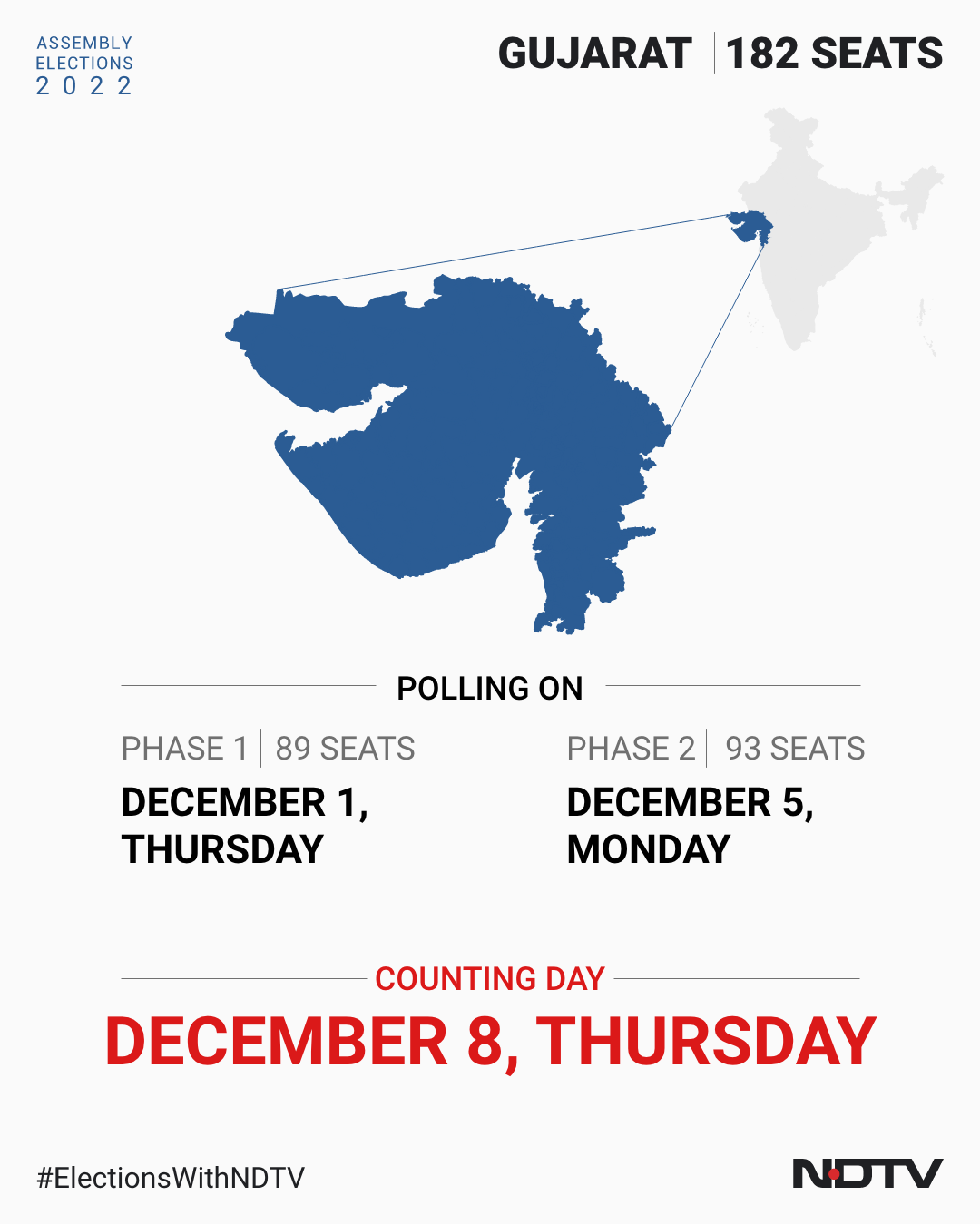