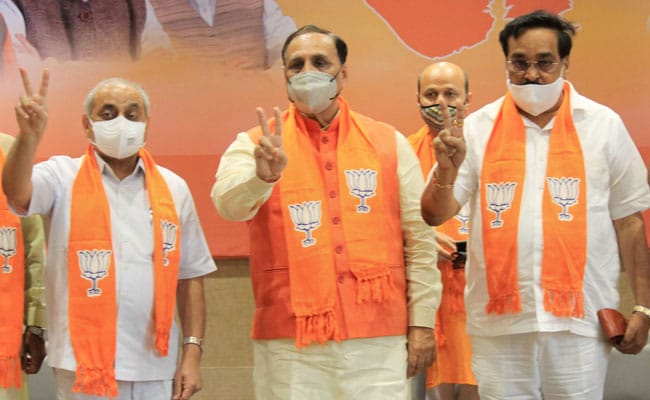 The BJP has completed a clean sweep in the Gujarat bypolls, with the party winning all eight seats that went to the polls on November 3. Chief Minister Vijay Rupani called the win a "trailer for the upcoming elections"; the state will hold full Assembly elections in 2022.

"The Congress is a sinking ship...they have lost connect with the people. Results are against them everywhere. It is a party sans leadership. The results (the Gujarat bypolls) are a trailer for the upcoming local polls here," Mr Rupani said earlier on Tuesday.

Mr Rupani said voters had rejected the "negative campaign and activities" of the Congress in Gujarat and other states where bypolls were held on November 3 and 7, including Madhya Pradesh and UP. The BJP-led NDA is also set to emerge as winners in Bihar, where full polls were held.

The BJP's Pradhyumansinh Jadeja beat the Congress's Dr Shantilal Senghani in Abdasa by 36,778 votes. Brijesh Merja beat the JJ Patel of the Congress in Morbi by 4,649 votes.

PV Rameshbhai of the BJP beat SR Gavit of the Congress in Dangs by a massive 60,095 votes. Akshaykumar Patel won in Karjan, by 16,425 votes, against the Congress's JK Dolubha.

In Dhari the BJP's JV Kakadiya beat the Congress's SM Kotadiya by 17,029 votes. In Gadhada, the BJP's AM Parmar beat Mohanbhai Solanki of the Congress by 23,295 votes

The bypolls were necessitated after sitting Congress MLAs resigned ahead of June Rajya Sabha elections. These resignations helped the BJP win three of four seats in the Upper House.

Five of these MLAs later joined the BJP and are contesting these bypolls on the ruling party's ticket.

These five are JV Kakadia from Dhari, Mr Merja from Morbi, Jitu Chaudhary from the tribal-reserved Kaprada seat, Akshaykumar Patel from Karajan and Mr Jadeja from Abdasa.

The BJP won 99 of the Assembly's 182 seats in 2017 polls, with the Congress winning 77. The remaining six were split between the NCP, the Bharatiya Tribal Party and independent candidates.

Bypolls for more than 50 Assembly seats (and one Lok Sabha constituency) were held on November 3 and November 7, and results for these will be announced today. A big chunk of these are in Madhya Pradesh, where the BJP has won eight seats and is leading in 11 others.