The GST Council Meeting is also reviewing the need to file three income tax returns every month in a bid to make the filing cycle more taxpayer friendly and is also set to review the GST Rates. 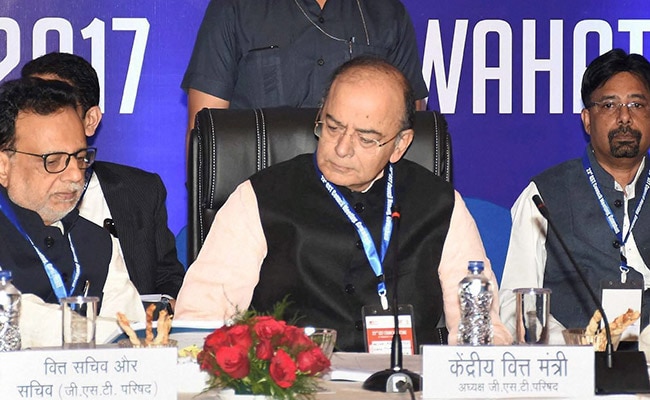 The GST Council headed by Union Finance Minister Arun Jaitley is meeting in Assam's capital Guwahati today to review the rates under the national sales tax. Only 50 of over 220 items will remain in the highest Goods and Services Tax slab of 28 per cent, with the others moved to lower slabs, Bihar Finance Minister Sushil Modi said today. The decision comes amid complaints by traders and small businesses which say the new nationwide tax, which came into effect from July, has increased their tax and administrative burden. The GST Council is also reviewing the need to file three income tax returns every month in a bid to make the filing cycle more taxpayer friendly.

Here are the latest developments in the GST Council meeting:

According to Revenue Secretary Hasmukh Adhia, the return filing procedure and the compliance burden has been eased.

Tax payers of nil liability (30-40 per cent filers) will file only Form 3B. He also said all tax payers will also file only GSTR-1.

The penalty for filing late has been reduced. The penalty is Rs 20 per day if liability is nil and Rs 50 per day for the others.
Nov 10, 2017 19:54 (IST)
GST Meeting discussed Income Tax credits for restaurants

Restaurants had a distinction of turnover less than Rs 1 Crore in the form of AC and non AC restaurants. Members of the GST Council were unanimous that the Income Tax Credits (ITC) that restaurants get, has not been passed on to the customers. Hence, the additional tax burden was passed on to restaurant goers, with no benefits of the ITC.

Hence, because of this, a decision was made to revoke the benefits of ITC to the restaurant industry. The tax rate for restaurants will also be 5 per cent.
Nov 10, 2017 19:32 (IST)
Other items that have been moved to lower tax slabs

Categories of cess items like luxury, sin and white goods, as well as other goods like auto, aircraft and yatch parts, construction- cement and paint will be put in lower categories.

Arun Jaitley said that customers will now have to pay 5 per cent tax at restaurants. Also, restaurants in and outside hotels will cost the same, except those with tariffs above Rs 7.5k/night.
Nov 10, 2017 19:25 (IST)
Arun Jaitley addresses changes made by the 23rd GST Council Meeting

Addressing the changes made to the GST tax regime, Arun Jaitley said that the last three GST meetings had discussed looking at the 28% tax bracket and rationalising it.
Nov 10, 2017 19:13 (IST)
Arun Jaitley addresses changes to GST

Arun Jaitley has started speaking with respect to the changes made in the GST tax regime in the 23rd GST Council Meeting.
Nov 10, 2017 19:11 (IST)
Rahul Gandhi criticises GST in another tweet

In yet another tweet, Rahul Gandhi said that the BJP cannot be allowed to impose a "Gabbar Singh Tax".

In the tweet, Rahul Gandhi said, "We will not allow BJP to impose a Gabbar Singh Tax on India. They cannot break the back of the small and medium businesses, crush the informal sector and destroy millions of jobs.
#GSTCouncilMeet"

In a tweet, Congress Vice President Rahul Gandhi came down heavily on the Modi government and criticised the current GST policy. He shared his criticisms in the tweet, in the form of suggestions.

1. Correct the fundamental flaw in GST architecture to give India a Genuine Simple Tax.

3. Acknowledge your incompetence, shed your arrogance and listen to the people of India."

1. Correct the fundamental flaw in GST architecture to give India a Genuine Simple Tax.

3. Acknowledge your incompetence, shed your arrogance and listen to the people of India.

In the GST meeting, a decision on lowering tax rates on food served in air-conditioned restaurants from the current 18 per cent to 12 per cent could also be taken.
Nov 10, 2017 18:23 (IST)
Need to file three income tax returns being reviewed

Prime Minister Narendra Modi said that the decision to move items from the 28 per cent tax slab onto the other slabs will cost the exchequer Rs 20,000 Crore ($3.07 billion) for this financial year.
Nov 10, 2017 17:44 (IST)
Puducherry Chief Minister V Narayanasamy wants the highest slab to be 18 per cent

Chocolates and other food preparations containing cocoa
Cocoa butter, fat and oil
Chewing gum/bubble gum and white chocolate not containing cocoa
Marble
Granite
All goods containing added sugar or other sweetening matter
Unmanufactured tobacco
Cigars
Perfumes
Beauty or make-up preparations
Preparations for use on hair, like Shampoos
Preparations for oral or dental hygiene
Pre-shave, shaving or after-shave preparations
Polishes and creams for footwear, furniture, floors, glass or metal
Nov 10, 2017 17:22 (IST)
Reports of three committees on GST likely to be taken up during the meeting

The GST meeting will also involve discussions on the reports of the three committees on different aspects of GST. The committees included are the Rate Fitment Committee, the GST composition scheme committee (headed by Himanta Biswa Sarma) and the GST network.
Nov 10, 2017 16:51 (IST)
GST Meeting: Many items brought down from 18 per cent tax slab

GST Meeting: several items have been brought down from 18 per cent tax slab to 12 per cent and 5 per cent slab and the list is exhaustive : Assam Finance Minister Himanta Biswa Sarma to NDTV.
Nov 10, 2017 15:35 (IST)
"Tax on goods of mass consumption like chewing gum, chocolates, shaving items, shampoo, skin creams, whose revenue implication is not much, has been reduced," Sushil Modi told reporters on the sidelines of the Goods and Services Tax (GST) Council meet.
GST Council meetingGoods and Services TaxArun Jaitley