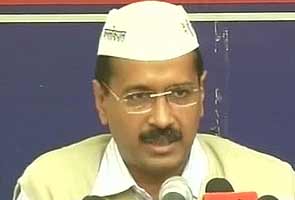 New Delhi: The opposition and anti-corruption campaigner Arvind Kejriwal has accused the government of conspiring to undermine the office of the national auditor or CAG, whose reports on telecom and coal have led to embarrassing controversies and allegations of graft for the government.

"The government wants to make CAG its agent," said Mr Kejriwal, whose new political party will be christened on the 26th of this month.

"The Congress has a track record of destroying institutions," said the BJP's Venkaiah Naidu.

Mr Narayanasamy denied making that remark, and the Press Trust of India said it stands by its story.

Vinod Rai, the CAG or Comptroller and Auditor General of India, has clashed often and publicly with the government, which has challenged his calculations that the country lost 1.76 lakh crores through faulty telecom policy, and another 1.86 lakh crores from the opaque allocation of coal blocks. Last week, Mr Rai said at a session of the World Economic Forum in Gurgaon that the government had been showing "appalling brazenness" in policy making, but that legislation like the Right to Information Act was delivering more and much-needed transparency.

Mr Rai also said that like his office, which is a constitutional body making it accountable to Parliament and not the government, the country's premier investigating agency the CBI and the Central Vigilance Commission or CVC must be made independent of the government - else, he said, they will function as "the hand-maidens" of the government.

Congress leader Digvijaya Singh sarcastically thanked Mr Rai for his insight and asked why he has been unable to stop his reports from being leaked to the media before they are presented to Parliament.
Comments
CAG