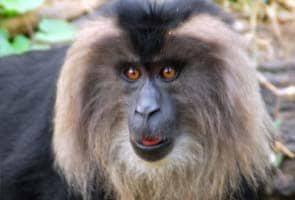 Hyderabad: There is rare good news for India on the conservation front, but bad news in general for the conservation of primates in the world, the nearest relatives of humans on Earth. The Lion Tailed Macaque, a jet black monkey with a characteristic silver mane like that of the lion, which inhabits the rainforests of southern India, is no longer on the verge of extinction.

At the on-going UN Convention on Biological Diversity in Hyderabad, the much-awaited list of the world's top 25 endangered primates was released which presented a bleak picture for the world's apes and monkeys, but brought some reason to cheer for India, as the global watch dog on species conservation, the International Union for the Conservation of Nature (IUCN), for the first time removed from its shame list the name of the Lion Tailed Monkey as its conservation status had been improved in the Western Ghats of India.

This arboreal monkey survives today with a population of about 3500 individuals living in fragmented habitats. For the last 40 years it was listed as one among the top 25 endangered primates. According to Russell A. Mittermeier, Head, Primate Specialist Group of IUCN, "good habitat protection and effective conservation measures by the Indian establishment has encouraged the IUCN to remove the monkey from the list."

Another good news is that the Himalayan Grey Langur has recently been re-discovered after a gap of almost 75 years from the Chamba Valley in Himachal Pradesh by researchers from the Coimbatore-based NGO Zoo Outreach Organization, whose researcher Sanjay Molur told NDTV some 250 individuals inhabit the Chamba valley. The Himalayan Grey Langur inhabits open areas living sometimes in harmony and at times in conflict with the locals.

In comparison, the not so good news comes in a report 'Primates in Peril', where conservationists highlight the plight of species such as the Pygmy Tarsier of southern and central Sulawesi, which was only known from three museum specimens until 2008, when three individuals were captured inside the Lore Lindu National Park and one more was observed in the wild. Researchers say 'the few remaining fragmented and isolated populations of this species are threatened by human encroachment and armed conflict.'

Likewise Madagascar's lemurs are severely threatened by habitat destruction and illegal hunting, which has accelerated dramatically since the change of power in the country in 2009. The rarest lemur, the Northern Sportive Lemur, is now down to 19 known individuals in the wild.

Promoted
Listen to the latest songs, only on JioSaavn.com
Dr Christoph Schwitzer, Head of Research at the Bristol Conservation and Science Foundation (BCSF), UK said "once again, it shows that the world's primates are under increasing threat from human activities. Whilst we haven't lost any primate species yet during this century, some of them are in very dire straits. In particular the lemurs are now one of the world's most endangered groups of mammals, after more than three years of political crisis and a lack of effective enforcement in their home country, Madagascar. A similar crisis is happening in South-East Asia, where trade in wildlife is bringing many primates very close to extinction."

More than half (54 per cent) of the world's 633 primate species and subspecies with known conservation status are classified as threatened with extinction on the IUCN Red List of Threatened Species. The main threats are habitat destruction, particularly from the burning and clearing of tropical forests, the hunting of primates for food, and the illegal wildlife trade.