'He Has Anger Management Issues': UP Cops On German Who Alleged Assault

German national Holger Eric, who had arrived in Uttar Pradesh's Sonbhadra to visit the Agori Fort, was attacked at the Robertsganj railway station on Saturday.

Sonbhadra, Uttar Pradesh: Just two weeks after a Swiss couple was brutally attacked in Uttar Pradesh, a German national has alleged assault by a railway supervisor in Sonbhadra district on Saturday. But the police said they were not convinced with the foreign national's version that he was the victim.

Holger Ereek, who had arrived in Sonbhadra from Benaras to visit the Agori Fort, had alleged he was attacked at the Robertsganj railway station. But the accused, Aman Kumar, contradicted him, saying the German hit him first when he greeted him. "I am innocent... the German national punched me when I said 'welcome to India' to him. He even spit on me," he alleged.

"This German national may have some problems... anger management issues, depression or some aberration," Anand Kumar, a senior UP police officer told a media briefing in state capital Lucknow. "He was aggressive with a railway supervisor who intervened too... and later, the police post in-charge," the Additional Director General of Police said.

"According to reports, the railway supervisor enquired the German national about his well-being, which angered him. The German hit the railway employee, who might have pushed him in retaliation," Mr Kumar said.

A UP police statement said Mr Ereek was already facing a stabbing charge in Himachal Pradesh's Kullu district in July last year. His passport and visa was also impounded in this case.

Refusing to speak to reporters, Holger Ereek, who has sustained minor injuries, said, "India have rules... the Supreme Court says privacy is a fundamental law. So please don't disturb my privacy. I am here to launch an FIR and that's it".

"It was simply a squabble, it is not a serious incident," Ram Pratap Singh, Superintendent of Police, Sonbhadra, told NDTV.

Last month, a Swiss tourist couple was attacked near Agra last month, sparking widespread outrage. Quentin Jeremy Clerc, 24, suffered a fractured skull and may have partial hearing loss, and his girlfriend Marie Droxz had a broken arm after they were hit with sticks and stones by a group that had chased them from a railway station in Fatehpur Sikri, the popular tourist destination right next to Agra. 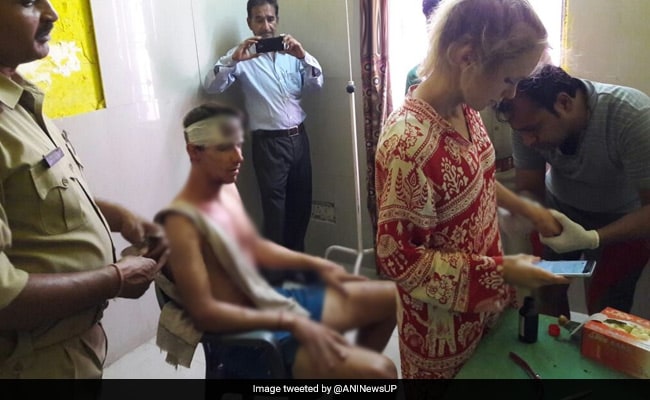 Three minors were among a group of people who followed and assaulted a Swiss couple near Agra.

As the couple lay wounded on the road after the attack, witnesses took videos on their mobile phones.

External Affairs Minister Sushma Swaraj and Tourism Minister KJ Alphons had written to Chief Minister Yogi Adityanath, who was left confronting serious questions about safety in his state while on a visit to the Taj Mahal, where he also clicked photos with foreign tourists.

Promoted
Listen to the latest songs, only on JioSaavn.com
Five people, including three underage boys, were arrested in connection with the case.