Election 2019: PM Modi said that out of anxiety of losing the general elections, the chief minister is insulting the Constitution. 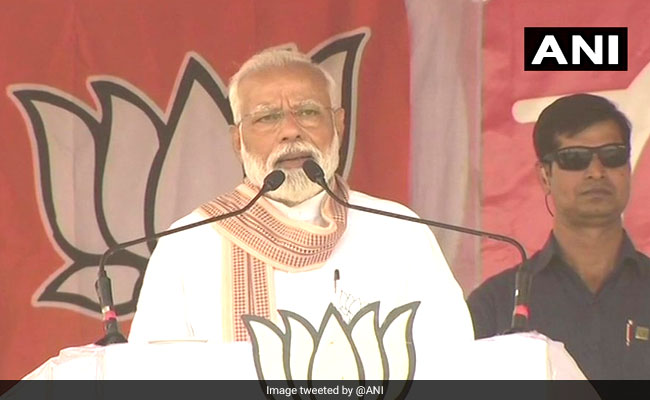 Prime Minister Narendra Modi today said that West Bengal Chief Minister Mamata Banerjee is insulting the Constitution by saying that she is not ready to accept him as the prime minister of the country.

Addressing an election rally at Bankura PM Modi said, "Didi (Ms Banerjee) is publicly saying that she is not ready to accept the country's PM as the head of the nation, but she feels proud in acknowledging Pakistan prime minister as that country's prime minister."

He said that out of anxiety of losing the general elections, the chief minister is insulting the Constitution.

The Prime Minister said that Ms Banerjee had not received telephone calls when he tried to contact her in the aftermath of Cyclone Fani.

"She did not take calls from me during the cyclone. The central government wanted to sit with officers of the state to discuss the situation, but Didi did not allow that too," PM Modi said.

Ms Banerjee had said in a rally on May 6 that she does not accept Narendra Modi as the prime minister of the country describing him as the "expiry PM" and that she will talk to the new prime minister after the election results.

"The chief minister is not interested in the betterment of the state, but that of her family, nephew and tolabaj (extortionists) of her party," PM Modi said.

PM Modi further said that how much the Trinamool Congress (TMC) supremo is worried can be understood by the language being used by her. "She is now talking about stones and slaps against me," PM Modi said.

"I am used to abuses, I have now got the ability to digest abuses from dictionaries from around the world," he said.

The Prime Minister claimed that Ms Banerjee has destroyed Bengal in her "lust for power" and now she is bent on destroying it further in the "fear" of losing power.

He said that the government of the state is being run by the Trinamool in the name only, while the actual business is being conducted by the syndicates.

He claimed that everybody - from teachers to intellectuals, businessmen to poor people - are in distress owing to the rule of extortionists in the state.

"Didi's tolabaj are not leaving poor MNREGA workers, the extortionists are even taking away their job cards," Modi said.

He said the Centre sends money so that people get foodgrains at low prices, but these are also being looted by the extortionists of Trinamool Congress.

He alleged that TMC leaders are making money from open cast coal mines, while labourers are not getting their wages.

"Didi gets angry when PM Modi talks of these atrocities of TMC, but Modi is not worried about her anger, because the love of 130 crore populace of the country is with him," the PM said.

He said that the chief minister should rather be worried about the anger of those who were duped by chitfund companies, young people who are jobless despite being qualified and government employees who are not getting adequate DA and salaries.

He claimed that Mamata Banerjee "should worry about the Kali, Durga bhakts in the state who have to perform puja with fear in their minds."

While the BJP has repeatedly accused the TMC government in the state of putting impediments in performance of religious rituals by the Hindus, the chief minister has vehemently denied the allegations, saying that every religion is treated equally in West Bengal.

PM Modi alleged that Mamata Banerjee has concern for illegal immigrants, but not for the indigenous adivasi people of the state.
"You have seen that when the brave sons of the country killed Pakistan's terrorists in their own country, she demanded that the bodies of the extremists be shown as proof," he said.

The PM Modi promised pucca houses for every poor, adivasi, dalit and backward family in the state by 2022.

He also promised that by 2022, every household in the country will have cooking gas connection.

Speaking at a rally in Purulia, the prime minister said that opposition leaders are "frustrated" after five phases of polling as it is evident that the "BJP is coming back to power".

Claiming that Ms Banerjee will receive a jolt on May 23 when the counting of the seven-phase general elections will be held, he said, it will commence the end of the TMC''s rule in West Bengal.

"I heard that Mamata Didi wants to slap Modi; I respect you, call you Didi (elder sister), your slap will be a blessing for me," the prime minister said.

Furious at being repeatedly termed as a party of ''tolabaj'' (extortionists) by Modi, the TMC supremo had said on Tuesday that "Narendra Modi should get a tight slap of democracy".

Reacting to Ms Banerjee's comment, PM Modi said in Purulia that the TMC chief should have the guts of slapping the chitfund company operators and extortionists, as that would absolve her of the accusations of being the leader of a "party of Triple T - Trinamool Tolabaj Tax".

He said that Purulia is rich in natural resources like coal. "But mafias have taken advantage of it and made illegal earnings from it," PM Modi said.

"While Didi is engaged in building the career of her nephew, ministers and leaders are involved in scams, and party cadres in extortion. How can the fortunes of the general public of the state improve?" asked PM Modi.