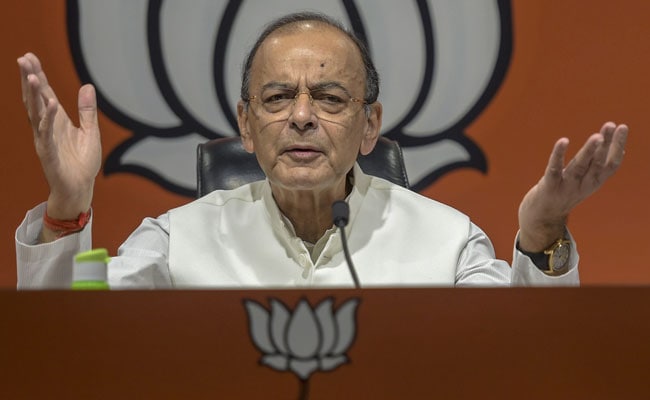 BJP minister Arun Jaitley has claimed the Congress is "desperate"

The assassination of former Prime Minister Rajiv Gandhi continues to be a flash point between the BJP and the Congress as the 2019  Lok Sabha election nears its final two phases. The latest comments in the matter come from Finance Minister Arun Jaitley who, on Thursday, mocked a "desperate Congress" for having "discovered a BJP role" in the matter.

The BJP leader's comments came after Congress leader Ahmed Patel attacked the BJP over their "abuse" of the former Prime Minister and said the "hatred" of the BJP-backed VP Singh government killed Rajiv Gandhi.

Mr Jaitley had posted a message on Twitter reminding the Congress party that it had initially blamed Tamil Nadu's DMK for the former Prime Minister's assassination.

The minister wrote: "From May 1991 till 2004, the Congress blamed its present ally the DMK for Shri Rajiv Gandhi's assassination... today a desperate Congress has discovered a BJP role."

From May 1991 till 2004, the Congress blamed its present ally the DMK for Shri Rajiv Gandhi's assassination. It even withdrew support from the United Front government on this ground. 28 years later, today a desperate Congress has discovered a BJP role.

In March the Congress and the DMK agreed an alliance ahead of Lok Sabha elections in the state on April 18. DMK leader MK Stalin said a Congress-DMK alliance had always proved successful "whenever the country faced a threat".

"The Kaamdars use India''s naval assets to strike at terror. The Naamdars use them for personal vacations with family and in-laws," he said in a tweet.

PM Modi often uses the word "naamdar" to refer to members of the Gandhi family and "kaamdar" to people he believes work hard for the nation.

The Kaamdars use India's Naval assets to strike at terror. The Naamdars use them for personal vacations with family and in-laws.

He wrote, "Abusing a martyred Prime Minister is the sign of ultimate cowardice. But who is responsible for his assassination?"

Abusing a martyred Prime Minster is the sign of ultimate cowardice

But who is responsible for his assassination ?

In another tweet, Mr Patel said, "Rajiv-ji lost his life due to their hatred and is no longer here amongst us to answer the baseless allegations and abuses which are being unleashed on him."

Mr Patel was referring to former Prime Minister VP Singh who led an anti-Congress National Front, backed by the BJP, to power in the 1989 Lok Sabha polls. However, the government only lasted a year before falling after the BJP withdrew support over the Babri Masjid issue.

Mr Jaitley was referring to tensions between the Congress and the DMK, who are currently allies in Tamil Nadu for the 2019 general election, in the aftermath of the Jain report, which claimed late Tamil Nadu Chief Minister M Karunanidhi was responsible for the freedom with which the LTTE operated in the state and therefore Rajiv Gandhi's assassination.

The Congress subsequently pulled support from the IK Gujral government after it refused to drop the DMK, leading to elections in 1998.

The PM has since also attacked the former Prime Minister for allegedly misusing an Indian Navy warship to transport Rajiv Gandhi and his family on a personal trip.