Geeta, Who Returned From Pakistan In 2015, Will Undergo DNA Test Again

Her DNA test had been conducted earlier after she arrived in India. 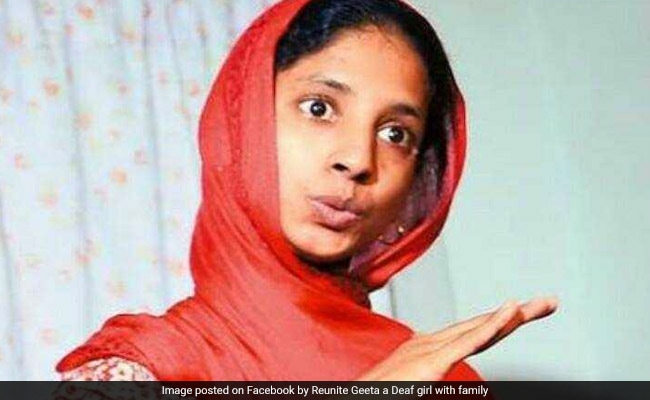 Geeta was found by Pakistan Rangers onboard the Samjhauta Express in Lahore. (File)

Indore: Geeta, the deaf and mute woman who returned from Pakistan in 2015 after accidentally landing in that country when she was a child, would be undergoing a fresh DNA test at the behest of the Ministry of External Affairs, an official said on Wednesday.

Her DNA test had been conducted earlier after she arrived in India.

Geeta was found by Pakistan Rangers onboard the Samjhauta Express in Lahore when she was seven or eight years old. She lived in Pakistan till she was brought back to India in October 2015.

"Her blood sample has been sent to the Centre for Cellular & Molecular Biology, Hyderabad for DNA test following a directive of MEA," a Madhya Pradesh government official said on the condition of anonymity.

He did not reveal why she was undergoing the DNA test again.

More than ten families have so far claimed that Geeta is their long-lost daughter, but failed to establish the claim. Geeta didn't recognise any of them as her parents.

Promoted
Listen to the latest songs, only on JioSaavn.com
The officer said that blood samples of these couples had been sent to Delhi for DNA profile matching with Geeta, and the results in all cases were negative. Geeta's DNA sample has been preserved at a laboratory in Delhi.

Geeta is living in an institution run an NGO in Indore. The Madhya Pradesh government's Social Justice Department is her caretaker