Geeta, Woman Rescued From Pakistan, Searches For Her Family In Telangana

An official of the NGO, Anand Service Society in Indore in Madhya Pradesh, taking care of Gita, had last month said they will conduct a fresh search after efforts to find her family have borne no fruit since her return in 2015. 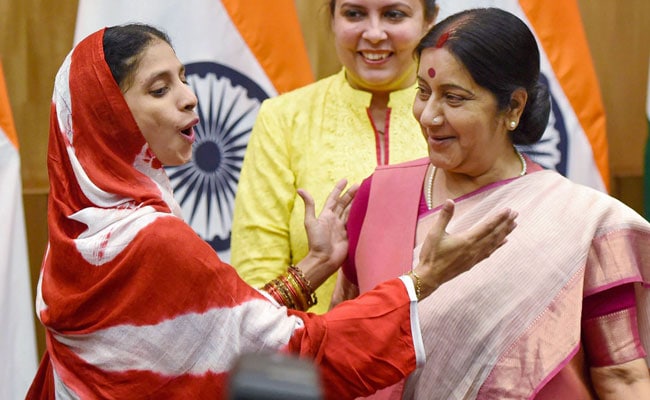 Geeta, a deaf and mute woman who returned from Pakistan five years ago, visited Basar town in Telangana along with her care-takers as part of efforts to locate her family from whom she got separated as a child.

However, it turned out to be another disappointing mission in her quest to reunite with her family as she could not connect with any of the spots in the town, about 200 kms from here on the Telangana-Maharashtra border.

An official of the NGO, Anand Service Society in Indore in Madhya Pradesh, taking care of Geeta, had last month said they will conduct a fresh search after efforts to find her family have borne no fruit since her return in 2015.

The society's director Gyanendra Purohit, a sign-language expert, had then said that during communication with Geeta they got some vital clues about her geographical background which indicated the region around Nanded in Maharashtra and Telangana.

Geeta, now around 30, and the NGO organisers on Tuesday visited Basar in Nirmal district, home to a famous Goddess Saraswati temple and river Godavari, based on some clues given by her about the place where she lived decades ago.

They had approached the police and a revenue official for their visit, a police official in Basar told PTI on Wednesday.

The clues given by her included the presence of a river, temple, railway station, widespread cultivation of paddy and people's habit of eating "idlis", the police official said.

They indicated it could be a place in Telangana or Andhra Pradesh and she was brought to Basar as it was thought to be matching with the information conveyed by her, he said.

During her visit, Geeta was taken to different places, including the railway station, temple and Godavari River but she could not recognise any of them, the official said.

The woman and her care-takers later left for Nanded in Maharashtra, he added.

Geeta is believed to have boarded the wrong train when she was around 10 years old and ended up in Lahore onboard Samjhouta Express train.

With special efforts by the then external affairs minister late Sushma Swaraj, she was brought back to India in October, 2015.

Though more than ten families from various parts of the country have claimed that Geeta was their missing daughter, none of them could substantiate it.