Delhi BJP chief Manoj Tiwari condemned the incident, but added that people should be cautious while reacting to such reports. Gautam Gambhir was also at the receiving of tweets from many social media users. 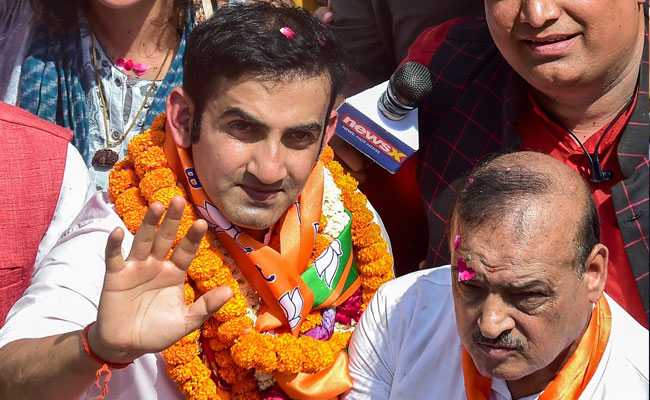 Newly-elected BJP lawmaker Gautam Gambhir's tweet condemning the alleged attack on a Muslim man in Gurgaon appears to have not gone down well with a section of his party colleagues.

The cricketer-turned-politician, who made an impressive debut in parliament by winning the East Delhi Lok Sabha seat, had termed the incident "deplorable" on Monday.

A section of BJP leaders expressed reservation over his tweet, saying the young leader's words could be used against the BJP.

"In Gurugram Muslim man told to remove skullcap,chant Jai Shri Ram".
It is deplorable. Exemplary action needed by Gurugram authorities. We are a secular nation where @Javedakhtarjadu writes "" & @RakeyshOmMehra gave us d song "" in Delhi 6.

Delhi BJP chief Manoj Tiwari condemned the incident, but added that people should be cautious while reacting to such reports. He claimed that some people, as part of a conspiracy, triggered such incidents in order to spread rumours and with a design to instill a sense of fear among Muslims.

"People need to be cautious so that they are not misled by such rumours. East Delhi MP Gautam Gambhir has reacted with innocence to this matter," Mr Tiwari said in a statement.

A senior Delhi BJP said, "Gambhir is no longer a cricketer and he should realise that his words and actions will be seen through the prism of politics."

"Nobody likes such incidents but what is the use of commenting on an incident in Haryana which may be used against the BJP by other parties," said a senior Delhi BJP leader.

Gautam Gambhir, 37, was also at the receiving of tweets from many social media users who asked him not to be selective in highlighting the case.

A Hindu was stabbed to death by Muslims in mathura

Hindu shopkeeper was beaten by Muslims

Either speak on every incident or stay quiet.

Mohammed Barakat Alam, 25, said he was returning from evening prayers on Saturday when he was set upon by a gang of four to five people who knocked off his skullcap and ordered him to chant "Jai Shri Ram". He alleged that he was manhandled when he refused.

Mr Gambhir, in another tweet, had said his secularism emanated from Prime Minister Narendra Modi's philosophy of "Sabka Saath, Sabka Vikas, Sabka Vishwas (everyone's support, everyone's growth, everyone's trust)" and added that any oppression on the basis of caste or religion was deplorable.

Gurgaon Police has registered a case. The police has also taken the CCTV footage to identify the culprits. No one has been arrested yet.