With the national elections just days away, political parties are betting hard on their marketing strategies. The goal: high visibility and maximum outreach.

Lok Sabha 2019: Sarees with images of Priyanka Gandhi Vadra are quite in demand this election season.

For the past two decades, 38-year-old Jeetram has been selling Congress merchandise outside the party headquarters at Delhi's Akhar Road. But for the first time, his merchandise will feature the newly-minted politician Priyanka Gandhi Vadra.

With the national elections just days away, political parties are betting hard on their marketing strategies. The goal: high visibility and maximum outreach.

Among the top-selling items at Jeetram's stall are sarees, car flags and stickers. Sarees with images of Ms Vadra are apparently quite in demand this election season. "It has been 15 days since I have been selling the saree and the sale is going well. The demand is good. The price is Rs 700. The saree has the Congress logo, a photo of Indira Gandhi and a photo of Priyanka Gandhi," he told NDTV. The sarees are manufactured in Gujarat. Retailers like Jeetram place their order and have it sent to Delhi. 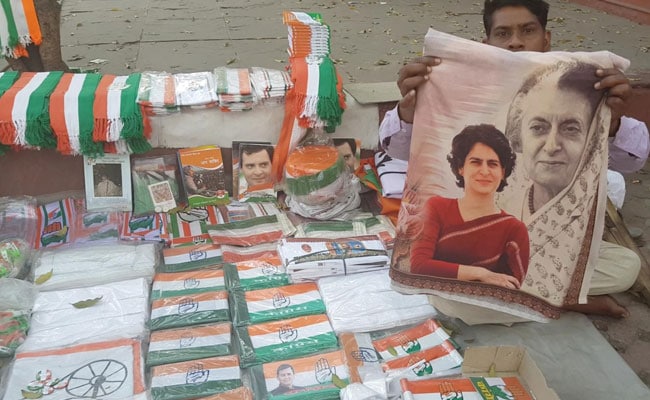 The saree has the Congress logo, a photo of Indira Gandhi and a photo of Priyanka Gandhi

Not to be outdone is the BJP, with its trademark NaMo merchandise. Prime Minister Narendra Modi, the face of BJP's election campaign, has been particularly ubiquitous on the party's merchandise, whether it's Narendra Modi watches or the NaMo caps.

In fact, BJP is the only party to have a dedicated forum for merchandise sales: the NaMo app. The party also sells items on mini trucks which are called 'NaMo Rath'.

A 'Mai Bhi Chowkidaar' t-shirt is available at Rs 200 whereas a Modi wall clock can be bought for Rs 275. Other items include stationery, balloons, and umbrellas.

"NaMo Merchandise was launched in September 2018 and so far, a total sale of worth Rs 10 crore has been made. The response has been good. All this money will go to the Namami Gange project," said Manoj Goel, member of BJP's National Executive.

All customers of the merchandise are the general public, Mr Goel claimed. "It's the public's emotional attachment," he said. 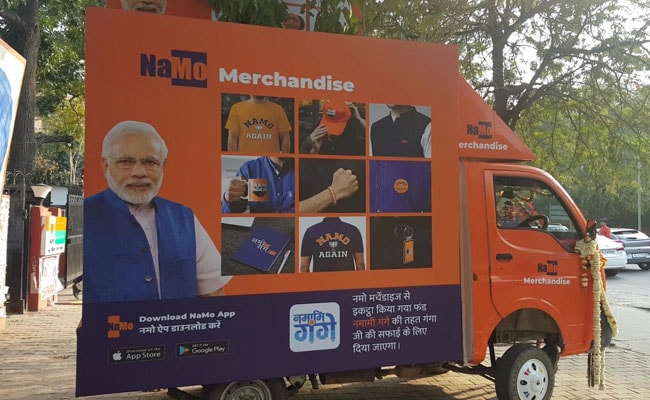 "BJP's 15 crore workers are also part of the public only. Public has an attachment and commitment towards its 'Pradhan Sewak'," he added

However, Anil, a shopkeeper selling election merchandise for the past 21 years in Delhi's Sadar Bazar, disagrees. "About 75% of the items are bought by political parties and the remaining 25% are bought by the public," he told NDTV. 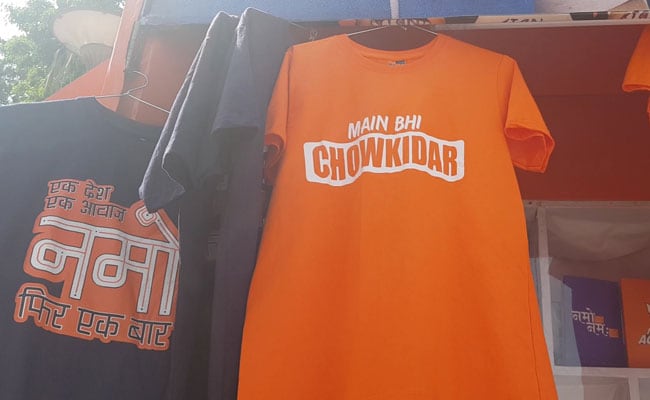 A 'Mai Bhi Chowkidaar' t-shirt is available at Rs 200 at the BJP's NaMo app.

"For the 2019 elections the NaMo cap, 'Mai bhi Chowkidaar' t-shirts, Akhilesh masks, Rahul and Priyanka masks are among the most sold goods," Anil said.

While these sales may or may not translate into votes, the sales driven by the election fervor is enough for these retailers to chalk the polling season as a win. National elections will begin on April 11 and will be held over seven phases. The counting of votes will be held on May 23.