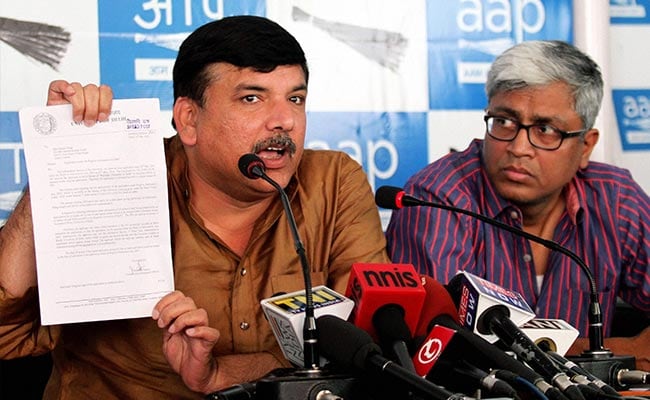 Sanjay Singh said farmers are being forced to dump their stock for negligible rates. (File)

New Delhi: As the Narendra Modi-led NDA government completed four years today, the AAP alleged that it has spent the time fulfilling interests of their corporate backers for which it had depleted public resources while destroying people's livelihoods.

"It is not that all sections of society are dissatisfied. There is a class of people who have benefitted disproportionately. Large corporations and businessmen have been allowed to loot public banks and flee the country," Aam Aadmi Party leader Sanjay Singh told media here.

"The Prime Minister promised 1.5 times cost of production to farmers, but today farmers are being forced to dump their stock for negligible rates. When a farmer demands his fair price, he gets a bullet in return," he said.

Promoted
Listen to the latest songs, only on JioSaavn.com
"Excise duty on fuel has been hiked to an exorbitant level -- more than 211 per cent increase compared to the 2014 levels. Until Karnataka elections, the centre was forced to control petrol and diesel prices, but as soon as the voting ended, the prices were increased. We are paying the highest prices for fuel in the entire subcontinent. We will see a direct rise in inflation as a consequence," the AAP leader said.

AAP spokesperson Dilip Pandey said that every scheme announced by the NDA government was a renamed version of previous governments. "Instead of making them work, the focus is on the publicity and propaganda of the scheme. On the one hand, you announce 'Selfie With Daughters', and on the other, your party members are raping and assaulting women," he said.
Comments
Narendra ModiFour years of Modi governmentAAP