Farooq Abdullah To Be Released After Over 7 Months In Detention

Farooq Abdullah, 83, was placed under detention along with other leaders including his son Omar Abdullah on August 5, when the government ended special status to Jammu and Kashmir under Article 370 and imposed massive restrictions.

Farooq Abdullah was placed under detention on August 5.

Former Jammu and Kashmir Chief Minister Farooq Abdullah will be released after over seven months in custody under the Public Safety Act or PSA, a stringent law that allows detention without trial.

Farooq Abdullah, 83, was placed under detention along with several leaders including his son Omar Abdullah and PDP's Mehbooba Mufti on August 5, when the government ended special status to Jammu and Kashmir under Article 370 and imposed massive security restrictions and a communication lockdown.

"My father is a free man again," tweeted his daughter Safia Abdullah Khan.

My father is a free man again.

In September, the Lok Sabha member was charged under the PSA, which enables detention without trial for up to two years. He was charged with "disturbing public order" under the law, which means shorter detention of three months. His home on Srinagar's Gupkar Road was designated a jail.

This was the first time that the PSA, used against terrorists, separatists or stone-throwers, was used on a mainstream politician, especially an MP and a three-time Chief Minister.

His detention was extended after three months and today was the last day of the extended custody. 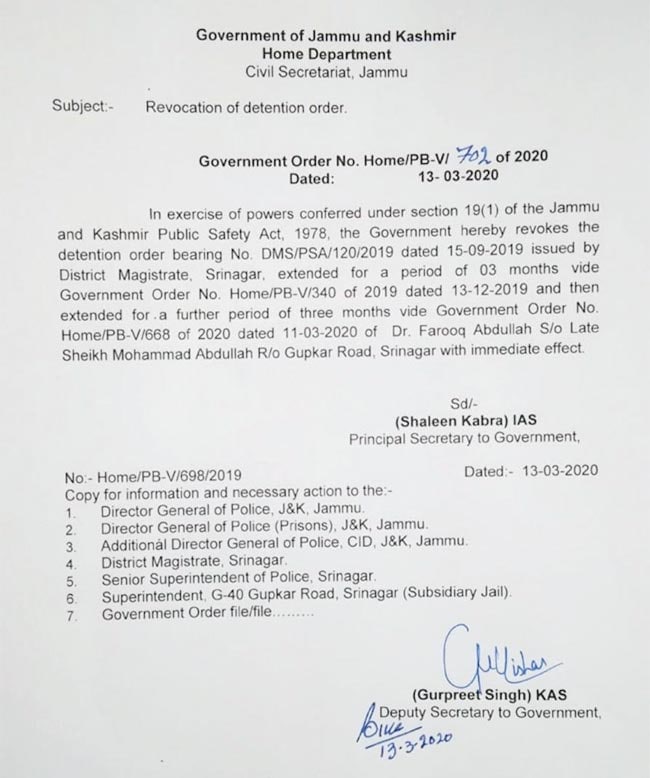 Farooq Abdullah, 83, was placed under detention along with several leaders including his son Omar Abdullah and PDP's Mehbooba Mufti on August 5

Days after the Article 370 move, Mr Abdullah had hit out at the government and also accused Home Minister Amit Shah of lying in parliament about him not being detained. "How do you think one would feel when your body is being carved, the body that stood together in all odds, fought every evil unitedly... They divided regions, will they divide hearts too? Will they divide Hindus and Muslims? I thought my India was for all, everyone who believes in secular, unity," the National Conference leader had said, breaking down while speaking to NDTV on August 6.

That was the last he was heard in public before being placed under house arrest.

Days ago, eight opposition parties sent a joint resolution to the BJP-led government, demanding the immediate release of all political detainees in Kashmir, especially the three former Chief Ministers -- Farooq and Omar Abdullah and Mehbooba Mufti. Under the Narendra Modi government, "democratic dissent is being muzzled by coercive administrative action, which has threatened the basic ideals of Justice, Liberty, Equality and Fraternity as enshrined in our Constitution," the resolution read.