The SCO is an eight-member security grouping including India, Pakistan, Russia and China that is seen asa counter to the US-led North Atlantic Treaty Organisation. 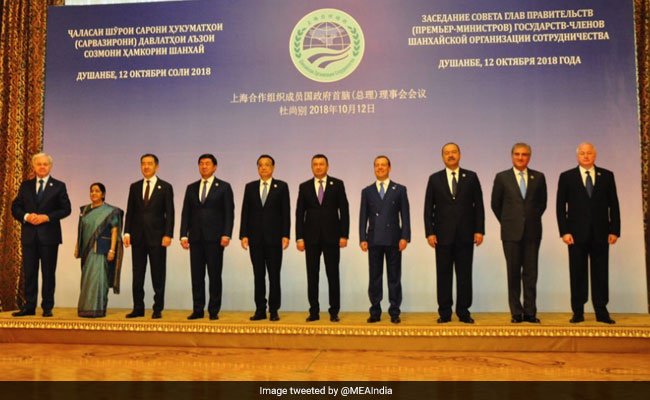 Foreign minister Sushma Swaraj and her Pakistani counterpart Shah Mehmood Qureshi were in the same photo frame at the Shanghai Cooperation Organisation (SCO) leaders' meeting in Tajikistan capital Dushanbe today,  weeks after their meeting on the sidelines of the UN General Assembly at New York was cancelled.

The SCO is an eight-member security grouping that includes India, Pakistan, Russia and China and is seen as a counter to the US-led North Atlantic Treaty Organisation.

Both Ms Swaraj and Mr Qureshi are participating in the a Council of Heads of Government meeting of the grouping. India and Pakistan are the new members of the China-dominated regional group.

This is the first time the foreign ministers of the two countries have shared a formal multilateral platform after the Imran Khan government came to power in Pakistan in August.
Last month, the two leaders had attended the informal luncheon meeting of SAARC (South Asian Association of Regional Cooperation) foreign ministers in New York.
At the meeting on September 27, Ms Swaraj left after delivering her speech. Pakistani foreign minister Shah Mehmood Qureshi alleged that the minister had deliberately left without waiting for his response.

The SCO is the only grouping other than the SAARC that has India and Pakistan as its members.
Ties between the neighbours have gone into deep freeze as New Delhi maintains that Pakistan continues to aid and abet terrorist activities in India.

India cancelled talks between two foreign ministers on the sidelines of the UNGA some twenty five hours after it was announced on September 20.

The Indian government cited the brutal killing of a soldier by Pakistani troops and Islamabad's move to release postage stamps glorifying terrorist Burhan Wani, who was killed by security forces in Kashmir in 2016. " The external affairs ministry spokesperson had said that Pakistan's "evil agenda" had been exposed and the "true face of the new Prime Minister of Pakistan, Imran Khan, has been revealed to the world in his first few months in office."