Mr Jaishankar, who is on a four-day official trip to Washington, also discussed Ukraine's conflict with Sullivan during their meeting at the White House on Tuesday. 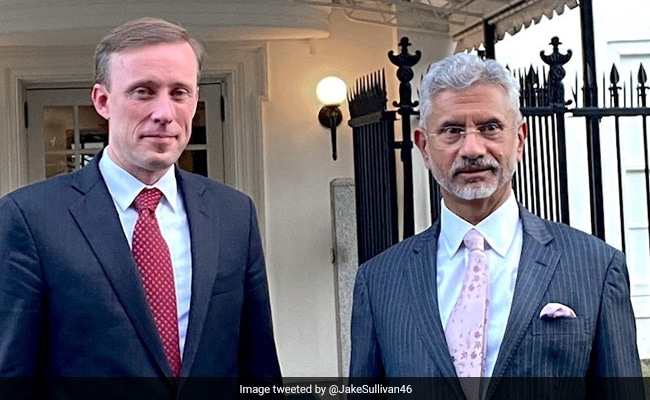 External Affairs Minister S Jaishankar held talks with US National Security Advisor Jake Sullivan during which they reviewed the progress in the US-India strategic partnership and exchanged views on global and regional issues, including approaches to advance a free, open, secure, and prosperous Indo-Pacific.

Mr Jaishankar, who is on a four-day official trip to Washington, also discussed Ukraine's conflict with Sullivan during their meeting at the White House on Tuesday.

"Met today with Indian External Affairs Minister @DrSJaishankar to discuss our shared efforts to deepen the US-India strategic partnership, mitigate the impacts of Russia's war in Ukraine, and advance a free, open, secure, and prosperous Indo-Pacific," Mr Sullivan said in a tweet.

In a readout, his office said that Mr Sullivan and Mr Jaishankar met "to review progress in the US-India strategic partnership and exchange views on global and regional priorities, including the implications of Russia's aggression against Ukraine and its impact on food and energy insecurity around the world." It said they discussed "approaches to promoting debt sustainability and advancing a free, open, secure, and prosperous Indo-Pacific." The US, India and several other world powers have been discussing the need to ensure a free, open and thriving Indo-Pacific in the backdrop of China's rising military manoeuvring in the region.

Mr Jaishankar said that they discussed the Ukraine conflict and its repercussions, the Indo-Pacific situation, South Asia and the Gulf.

"Good to meet US National Security Advisor @JakeSullivan46. Discussed the Ukraine conflict and its repercussions, the Indo-Pacific situation, South Asia and the Gulf. Exchanged views on addressing the current global economic volatility," he tweeted.

India has not yet condemned the Russian invasion of Ukraine and it has been maintaining that the crisis must be resolved through diplomacy and dialogue.

Earlier in the day, the minister met Foreign Minister Justin Tkatchenko of Papua New Guinea. "Spoke about our ongoing cooperation with the Pacific Islands. Discussed next steps for taking it forward in the coming days," he said.