For Troll Who Targetted Sushma Swaraj, Her Husband's Emotional Response 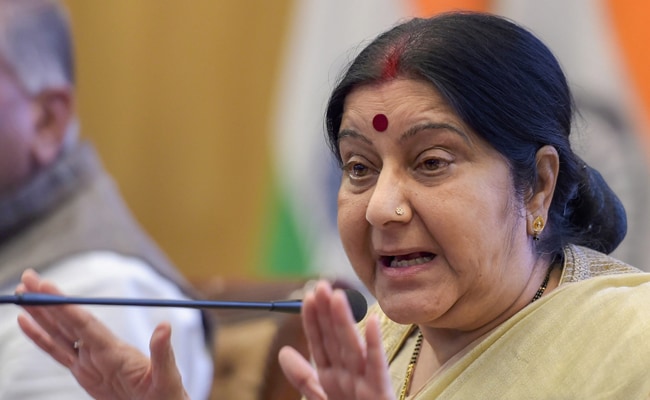 Sushma Swaraj's husband Swaraj Kaushal on Sunday gave a deeply emotional response to an ugly, abusive tweet targetting the foreign minister over the grant of passport to an inter-faith couple last month. Swaraj Kaushal on Saturday highlighted the shocking tweet -- which prescribed physical violence against the minister.

But while many condemned the offensive tweet, others targetted him, questioning the foreign ministry's action in the case.

The former Governor of Mizoram on Sunday posted:

Your words have given us unbearable pain. Just to share with you, my mother died of cancer in 1993. Sushma was an MP and a former Education Minister. She lived in the hospital for a year. She refused to engage a medical attendant and attended on my dying mother personally. /1 https://t.co/b4iwIUx0SA

Such was her devotion to the family. As per my father's wish, she lit my father's pyre. We adore her. Please do not use such words for her. We are first generation in law and politics. We pray for nothing more than her life. Pls convey my profound regards to your wife. /2

Delhi Chief Minister Arvind Kejriwal on Sunday evening responded to Swaraj Kaushal's tweet. "Sir, pl don't explain to these people. Everyone knows who is controlling them and from where it is coming. Its politics. But sad part is that politics has become sooooo dirty. Our best wishes to ur family," Mr Kejriwal tweeted.

Ms Swaraj -- who has been widely  admired on Twitter for helping out people facing difficulties -- is being trolled for days after her ministry gave clearance for the passport of an inter-faith couple and took action against an official who allegedly harassed them.

Ms Swaraj, who was on a visit abroad at the time, took a swipe at the trolls on her return, tweeting: "I was out of India from 17th to 23rd June 2018. I do not know what happened in my absence. However, I am honoured with some tweets. I am sharing them with you. So I have liked them".

But this triggered another spate of abuse and criticism from Twitter users.

On Saturday evening, Swaraj Kaushal tweeted, "Friends, please see this," tagging the troll whose Twitter profile mentions the name Mukesh Gupta with "IIT Delhi" in the handle. Later, when the troll deleted the tweet, he posted a screenshot. Today, the Twitter handle appears to have been deleted or blocked.