For PM's Speech, No Bullet-Proof Glass is a Break from Tradition 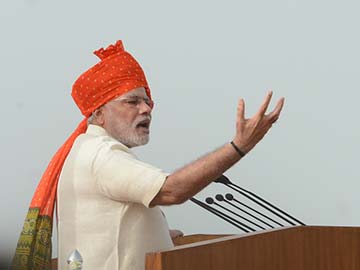 New Delhi: Prime Minister Narendra Modi's office insisted that his first Independence Day speech would be delivered without a bullet-proof shield at his podium at Delhi's historic Red Fort. There was another break from tradition - more than 10,000 members of the public were present; the occasion is usually reserved for VIPs. (Come, Make In India. Manufacture Here: PM's Call to Investors)

Mr Modi, wearing a saffron turban, opened his speech by declaring "I am here as your pradhan sevak (main server) not  as the Pradhan Mantri (Prime  Minister)." (PM on Rape Cases: Correct Sons, Don't Question Daughters)

Mr Modi, 63, accused recently by the opposition of trying to stifle its voice in the just-concluded Parliament session, said, "We want to rule not by the strength of our majority, but with the power of consensus."  (PM Modi's Speech: Read the Highlights)

Mr Modi led the BJP to the biggest mandate in 30 years at the national elections. He paid tribute to previous governments and prime ministers for helping shape India. (PM Modi's Top 10 Quotes)

Promoted
Listen to the latest songs, only on JioSaavn.com
Drones and hundreds of security cameras were used along the route the PM took to Red Fort. He stopped en route to pay homage at Mahatma Gandhi's memorial and then inspected the Guard of Honour at the Red Fort before beginning his extempore speech.  He used neither a teleprompter nor notes. (I Am an Outsider to Delhi, Stresses PM Modi in His Speech)

Plush strings of white flowers fluttered prettily in the breeze on the stage from where he made his speech. (PM Modi's Independence Day Speech: Who Said What)