Delhi farmers' protest: The last time when the farmers protested in Delhi on October 2, they were met with barricades, water cannons and even tear gas shells. 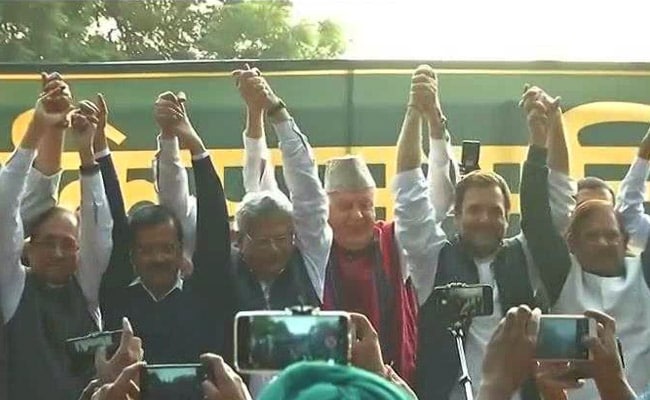 Farmers' protest: Rahul Gandhi was joined by other opposition leaders in their support.

Tens of thousands of farmers, some carrying skulls of those who committed suicide, had marched towards parliament demanding loan waivers and better prices for their produce.The protest is one of the biggest displays of frustration with BJP government, which faces a tough general election due by May next year. Many of the farmers came in trains and other packed into buses and other modes of transport, it said.

Over 3,500 police personnel have deployed to ensure security at the event. As many as 850 police personnel, up to the rank of sub-inspectors, have been deployed in the Central district. They will be augmented by the presence of 12 police companies, including two of women, comprising 75-80 personnel each, a police official said. The protesters are backed by opposition politicians, including Rahul Gandhi, Arvind Kejriwal, Sharad Pawar, HD Deve Gowda and others. CPI(M) general secretary Sitaram Yechury and Aam Aadmi Party leader Arvind Kejriwal also addressed the masses, among others.

The last time when the farmers protested in Delhi on October 2, they were met with barricades, water cannons and even tear gas shells. This time, the leaders of the movement are hoping for cooperation from authorities.

Here are the LIVE updates on the farmers' protest in Delhi:

Nov 30, 2018 16:08 (IST)
BJP's Bima Yojana is "Daka Yojana": Arvind Kejriwal
Pradhan Mantri Fasal Bima Yojana is a fraud, money is withdrawn from accounts of farmers without their consent. Insurance firms have put a condition, that they won't compensate till 70% if crop is destroyed. It is a scheme to rob and not an insurance scheme. It is Daaka Yojna and not Beema Yojna. We compensated farmers to the tune of 50 K per hectare, if Delhi government can do it, can't PM Modi do it? We need to discontinue Fasal Beema Yojna, it was drafted to benefit owners of insurance firms.
Nov 30, 2018 16:07 (IST)
There are 3 demands that need to be met, says Arvind Kejriwal:
Nov 30, 2018 16:02 (IST)
Arvind Kejriwal Addresses Mega Farmers' Rally:
Nov 30, 2018 15:50 (IST)
Rahul Gandhi Addresses Farmers Rally 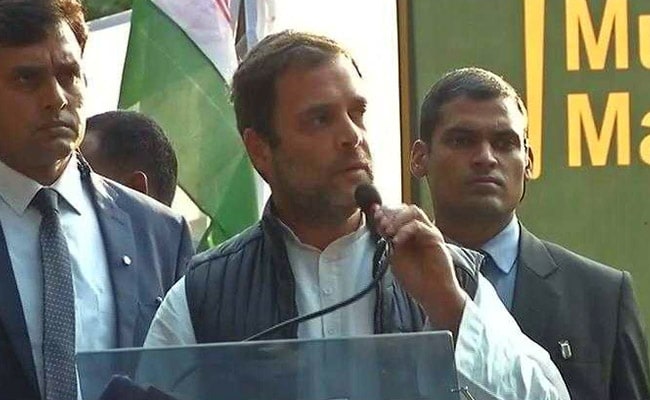 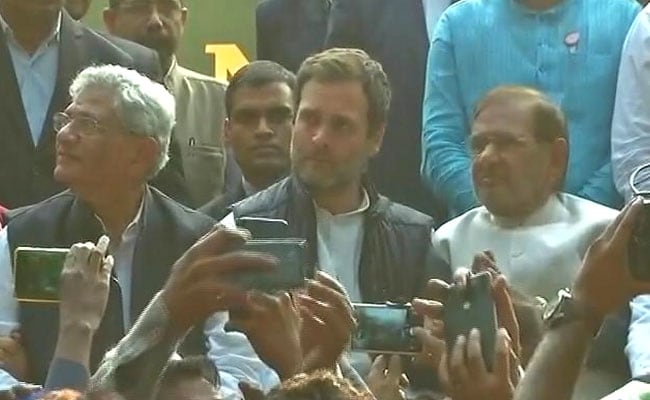 Congress President @RahulGandhi will be joining the #KisanMuktiMarch shortly to stand in support of India's farmers. #CongressWithKisanpic.twitter.com/AEsWpSEABs 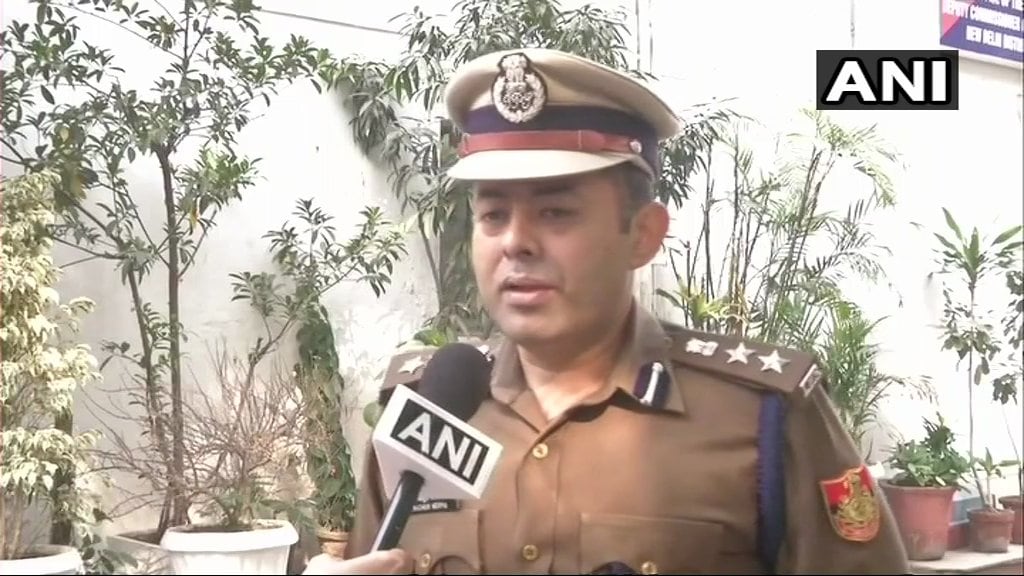 Deputy commissioner of police (New Delhi) Madhur Verma said farmers were given permission to hold rally from Ramlila Maidan to Jantar Mantar after multiple rounds of talks. He said that multiple layers of barricades have been put in place around protest sites'.
Nov 30, 2018 13:31 (IST)
The national secretary of the All India Kisan Sangharsh Coordination Committee (AIKSCC), Asish Mittal, said farmers from 24 states have also joined the protest to press for their demands, including debt relief and remunerative prices for their produce.
Nov 30, 2018 13:27 (IST)
The protesters, backed by the Left and a number of farmer groups, marched for more than 25 km from five different locations towards Ramlila Maidan yesterday.
Nov 30, 2018 13:05 (IST)
Social activist Medha Patkar said many political leaders, including Delhi Chief Minister Arvind Kejriwal and Nationalist Congress Party chief Sharad Pawar, are expected to participate in the rally. National Conference leader Farooq Abdullah and Trinamool Congress' Dinesh Trivedi, Loktantrik Janata Dal (LJD) chief Sharad Yadav were among the others who were expected to address the farmers.
Nov 30, 2018 13:03 (IST)
The farmers have now reached Jantar Mantar.
Nov 30, 2018 12:42 (IST)
The farmers were allowed to go to Parliament street following due permission from the Delhi Police.
Nov 30, 2018 12:37 (IST) 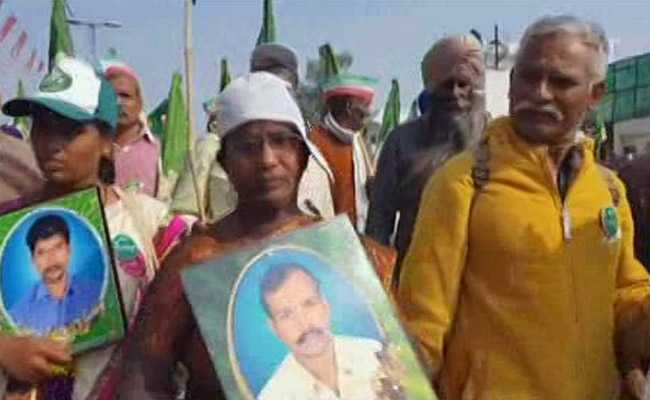 Widows of farmers from Telangana who committed suicide after they failed to get adequate compensation from the government are also participating in the protest.
Nov 30, 2018 12:26 (IST)
Farmers' March To Parliament Affects Traffic In Central, Lutyens'
Traffic in central and Lutyens' Delhi went into a tizzy on Friday as thousands of farmers, who have been camping at the Ramlila ground since Thursday, began their march to Parliament amid heavy policy deployment, to press for their various demands including debt relief and remunerative prices for their produce.
Traffic was affected on the Jawaharlal Nehru Marg, on the stretch near Guru Nanak Eye hospital, Maharaja Ranjit Singh flyover, Barakhamba Chowk and Janpath on Friday morning. Commuters were advised to avoid these routes.
Around 1,000 traffic police personnel have been deployed between Ramlila maidan and Parliament to ensure that commuters do not face inconvenience.
"Due to this march, Kasturba Gandhi Marg, Ferozshah Road, Janpath, Mandir Marg, Panchkuian Marg, Ashoka Road, Jai Singh Marg and inner and outer circles of Connaught Place will be effected. Our senior traffic officials, along with other traffic personnel, are managing traffic," a senior traffic police official said.
Citizens were advised to follow the Delhi Traffic Police Facebook page, Twitter handle, WhatsApp and the traffic helpline for live updates.
Nov 30, 2018 11:40 (IST)
Delhi Traffic Police is tweeting live updates on the route taken by the farmers and asked commuters to stay updated. "Around 1,000 traffic personnel have been deployed in all these routes to plan diversions and to keep the traffic smooth," Joint Commissioner (Traffic) Alok Kumar said.
Nov 30, 2018 11:31 (IST) 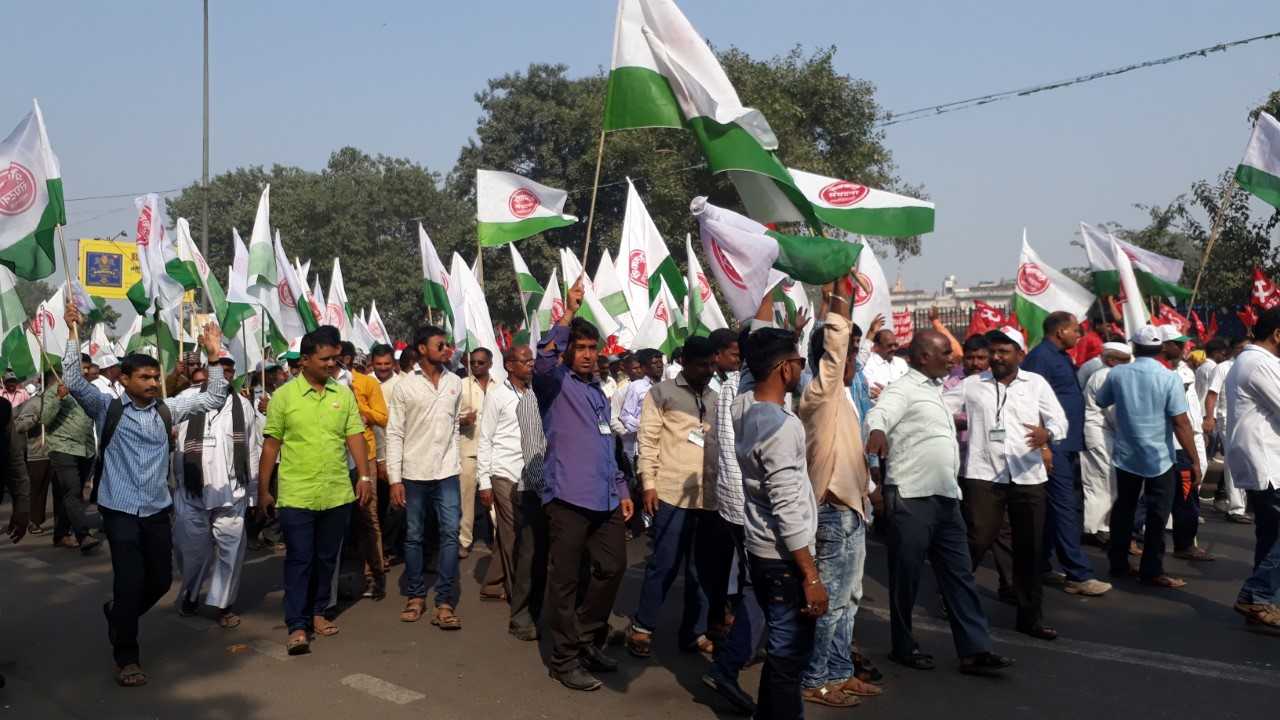 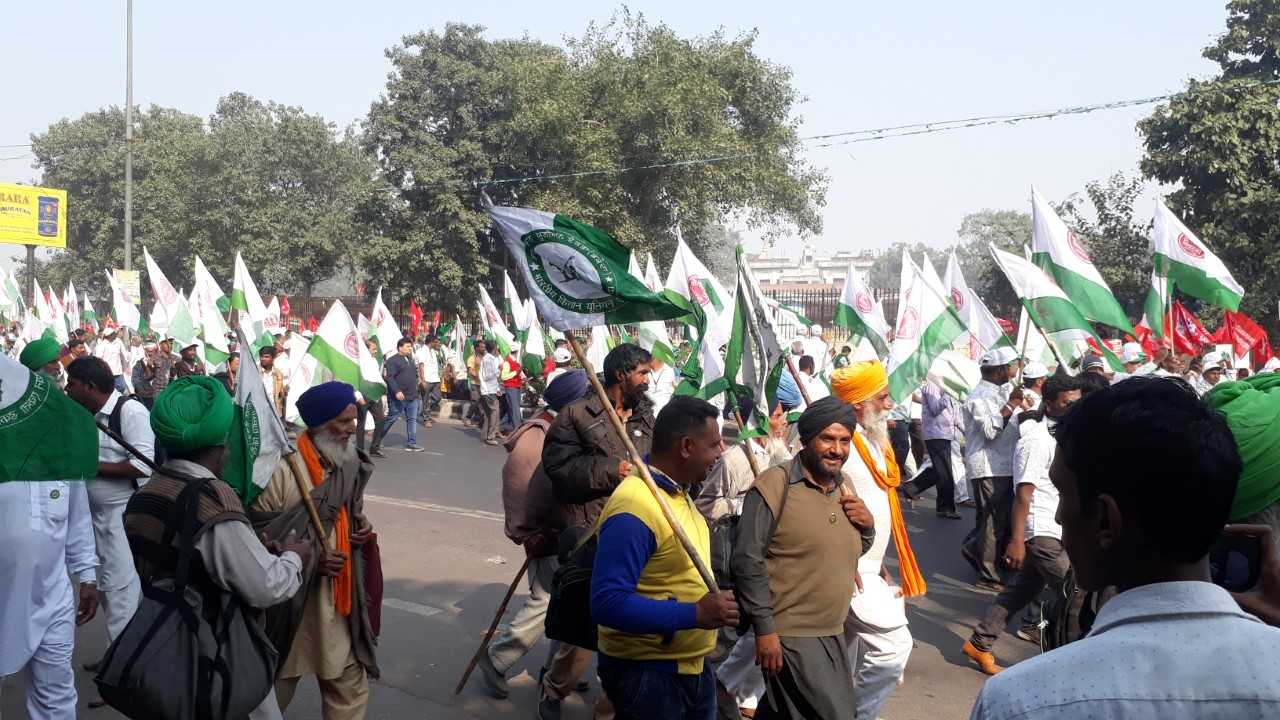 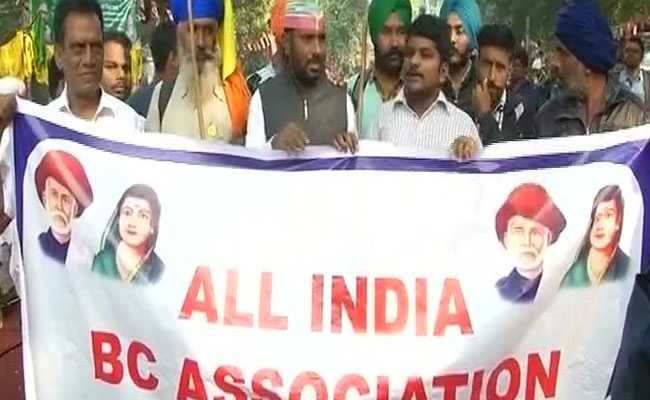 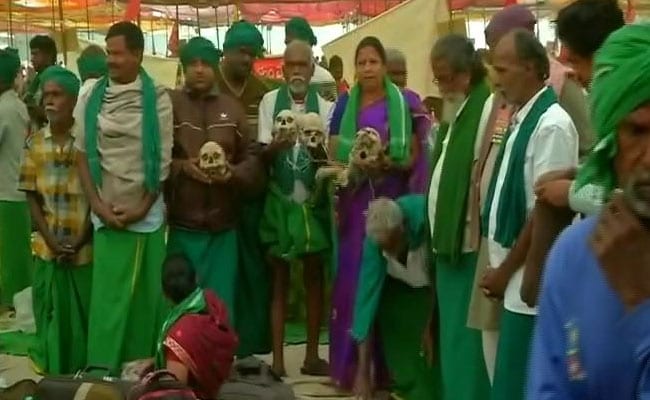 The farmers are planning to march towards the Parliament shortly after 10 am, however it is not sure whether they have got permission from the police. A group from Tamil Nadu threatened to march naked if they are not allowed to go to Parliament on Friday. Last year, the group staged protests at Jantar Mantar with the skulls of eight  farmers who killed themselves owing to farm losses. The two-day rally will be one of the largest congregations of farmers in Delhi, the AIKSCC has claimed.
Nov 30, 2018 09:08 (IST)
Doctors, Lawyers, Professors extend support
Vounteers, including doctors, lawyers, professors and artists, all came out in large numbers to help. Around 600-700 volunteers of a solidarity group Nation For Farmers marched with the farmers from four assembly points -Bijwasan, Majnu Ka Tila, Nizamuddin and Anand Vihar towards Ramlila Maidan.
Nov 30, 2018 09:06 (IST)
Five Gurdwaras in Delhi have extended their help to the farmers. Bangla Sahib Gurdwara,  Sisganj Sahib, Rakabganj, Bap Sahib and Manju Ka Tila provided accommodation to farmers for the night.
Nov 30, 2018 09:03 (IST) 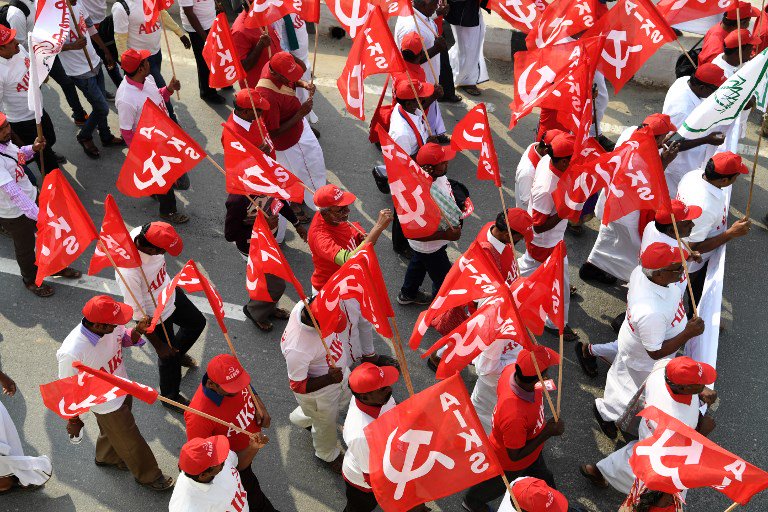 Nov 30, 2018 08:54 (IST)
The farmers from different corners of the country, including Andhra Pradesh,  Gujarat, Madhya Pradesh, Maharashtra, Tamil Nadu, West Bengal and Uttar Pradesh have reached the national capital for the protest.
Nov 30, 2018 08:53 (IST)
From Ramlila Maidan, the farmers will march to Parliament Street on today.