Farmers Protest March: The son of a farmers' body leader Jai Singh, Navdeep has been charged with attempt to murder which carries a maximum penalty of life imprisonment, rioting and violation of COVID-19 rules. 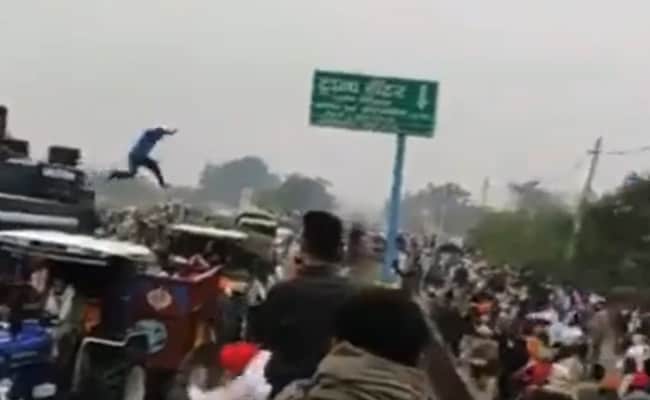 Farmers Protest March in Delhi: Navdeep Singh leapt from the water cannon vehicle after turning it off.

A young man from Haryana's Ambala who was seen scaling a police water cannon to turn it off in one of the most iconic moments of the protest march of farmers towards Delhi so far has been charged with attempt to murder.

Hailed as a hero on social media after the video was widely shared, 26-year-old Navdeep Singh had climbed the blue water cannon vehicle showering protesting farmers in the middle of a north Indian cold wave on Wednesday as they braved brutish attempts to block their march.

How a young farmer from Ambala Navdeep Singh braved police lathis to climb and turn off the water cannon tap and jump back on to a tractor trolley #farmersprotestpic.twitter.com/Kzr1WJggQI

The son of a farmers' body leader Jai Singh, Navdeep has been charged with attempt to murder which carries a maximum penalty of life imprisonment, rioting and violation of COVID-19 rules.

"After my studies, I started doing farming with my father who is a farm leader. I never indulged in any illegal activities and got courage from the commitment of protesting farmers to climb the vehicle and turn off the tap as it was hurting them," Navdeep told The Times of India newspaper.

"While protesting peacefully, we were demanding a passage to Delhi but the police blocked our passage. We have all the right to question the government and protest if any anti-people laws are passed," he said.

The police in BJP-ruled Haryana and in Delhi have been widely criticised for their heavy-handed crackdown on farmers angry at agricultural reforms they fear will leave them at the mercy of big corporations.

For the third day on Friday, the police fired tear gas and water cannon at the farmers who finally managed to reach Delhi to protest the new laws.

The police had deployed hundreds of officers at different entry points to the capital, parking trucks full of sand and laying barbed wire and concrete blocks to stop the farmers, some of whom threw stones and broke barricades.