Shiromani Akali Dal chief Sukhbir Singh Badal calls upon opposition parties to close ranks for a united fight against controversial farm bills, differences over which led to the once BJP ally walking out the NDA. 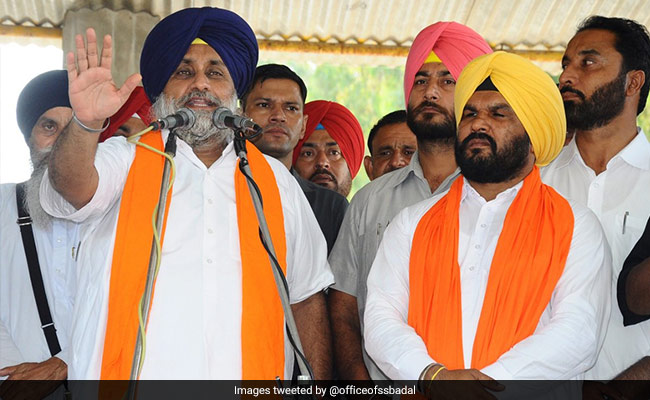 The new controversial farm bills, passed last week, can have disastrous implications on the national economy, Shiromani Akali Dal chief Sukhbir Singh Badal said calling upon all opposition parties to close ranks for a united fight to save the country's farmers.

Mr Badal's party, the SAD, was the BJP's oldest ally before it walked out of the National Democratic Alliance on Saturday over centre's refusal to assure procurement of crops on minimum support price, and exclusion of Punjabi as an official language in Jammu and Kashmir. The SAD is the third major NDA member to pull out of the grouping after the Shiv Sena and the Telugu Desam Party.

"The farmers' economic plight affects the entire economy. Anything like the new farm bills, which increases the uncertainty about the fate of farmers' produce can have disastrous implication for the economy and social stability of the country. Therefore, what we are fighting for is to protect the country's wider national interests," Mr Badal said at gatherings of party workers and farmers at Ropar, Hoshiarpur and Phagwara in Punjab.

Facing opposition from the Congress and Aam Aadmi Party in Punjab, Mr Badal has called upon all political parties and organisations to close ranks for a united fight to protect the interests of the farmers, farm labour and produce traders in the country.

"We are ready to join or follow any struggle in the overall interests of the farmers, farm labour, aarhatiyas (farm agents) and other farm produce traders," he said.

Mr Badal's call to unite has resonated with the Shiv Sena and the Trinamool Congress in West Bengal.

The SAD President also reiterated his party's commitment to preserving peace, communal harmony and fraternity in Punjab. " I must caution against attempts to defame our struggle by disturbing peace," Mr Badal said.

Farmers have been protesting the bills fearing they will end the price support system and drive the entry of private players. They want these bills repealed. The opposition parties have backed the farmers' demands seeking legislative guarantee for continued government support in procuring farm produce.

Prime Minister Narendra Modi has called farmers' protests a result of "propaganda" by the opposition parties and maintained the new bills benefit farmers by giving them the option to sell their produce to "anywhere at any price" - something he mentioned in Mann Ki Baat radio programme as well.

25 Embarkation Points For Haj-2023, Application Forms To Be Free: Centre