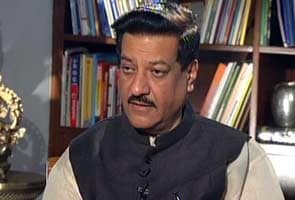 Mumbai: In the midst of a raging furore over the arrest of two young women over their Facebook post on the shutdown in Mumbai, Maharashtra Chief Minister Prithviraj Chavan has promised "strict action" against police personnel, if they were found guilty in the probe that has been ordered into the incident. One of the women had, on the social networking site, criticised the shutdown in the city on the day of Bal Thackeray's funeral; her friend had "liked" the comment.

"The State Government has taken the matter in all seriousness and strict action will be taken against the defaulting personnel, in case a default is established in the enquiry," Mr Chavan said in an email response to Press Council of India chief Markandey Katju. The latter had, in two separate emails sent to Mr Chavan on Monday, sought immediate" action against the police personnel, and also warned of "legal consequences" if the Chief Minister failed to act.

Mr Chavan also said he would initiate action once he received the probe report on the entire episode. The inquiry is being conducted by Sukhwinder Singh, Special Inspector General of Konkan range. "I have instructed an inquiry to be conducted by a very senior officer immediately. I will act as soon as I receive the report," he said.

The state government had, so far, reacted cautiously over the matter which has sparked a nationwide outrage.

The Shiv Sena, meanwhile, has defended the police action. "We support the police's action," said Shiv Sena MP Sanjay Raut earlier in the day, adding, "the Facebook comments could have led to a law and order situation." The Sena has repeatedly patted itself on the back since the weekend for peace and calm in Mumbai after Mr Thackeray's death despite lakhs of Sena workers and supporters pouring into the city.

The two women, both 21, told NDTV today that they regretted the Facebook post, which one of them wrote and another liked. The young woman said in her post, "Respect is earned, not given and definitely not forced. Today Mumbai shuts down due to fear and not due to respect."

A local Shiv Sena leader Bhushan Sankhe took umbrage and registered a police complaint against the girls - Sena workers, he said, were "upset at Bal Thackeray being "insulted." The local police came knocking at their doors on Sunday evening, barely half an hour after the post was written, whisked them away and detained them, the women say, till 2.30 am. They were charged under various sections of the law that could entail up to three years in jail, were ordered by a court to serve 14 days in jail and, hours later, were allowed out on bail after paying two bonds of Rs. 15,000 each.

Mr Sankhe has told NDTV that he does not regret his decision to lodge a complaint against the women. He also admitted that he called one of them and asked her to delete her Facebook post because "it was against our beloved leader." He, however, says he knows nothing about an attack that evening on a clinic owned by the woman's uncle, allegedly by 30 to 40 Shiv Sena workers, who ransacked the place. They broke window panes, damaged equipment and ripped out beds and wash basins; there were two in-house patients at the clinic at the time. 10 people were arrested for the attack but were granted bail soon after - the surety for the release, significantly, was Rs 7,500 for each, half of what the two women had to furnish when they were granted bail.

Even before the police arrived on Sunday, the woman says she had deleted the comment on her Facebook page. And had then posted an "apology." She has since de-activated her Facebook profile. "I never dreamt I would have to go to court," the 21-year-old said.

The two women were booked by the Palghar Police under Section 295 A of the Indian Penal Code (IPC) for "deliberate and malicious acts, intended to outrage religious feelings or any class by insulting its religion or religious beliefs." They were later also charged under Section 505 (2) of the IPC for making "statements creating or promoting enmity, hatred or ill-will between classes", and the police added Section 66 (A) of the Information Technology Act, which has been severely criticised for being authoritarian and stifling freedom of expression.

Minister of State for Information Technology Milind Deora has, however, defended the law. "Question isn't about amending 66A of the IT Act, its about preventing misuse by the police, who clearly acted in haste & applied wrong. Also, vandals of Dhada Hospital must be booked! Hope Maharashtra Government takes immediate corrective action," Mr Deora tweeted this morning.

Yesterday Shiv Sena's Rahul Narvekar, who heads the party's legal cell, had denied that the police complaint was lodged by a Sena leader. "It is for the state administration and police department to investigate complaints that are lodged. I am not aware of any complaint filed by any shakha pramukh of Shiv Sena. We will have to look into it. Uddhav Thackeray has made an appeal to the cadre to maintain peace," he had said.

Social media has been abuzz with tweets and Facebook posts about the arrest of the women; most people have been demanding action against the policemen who arrested the two women and the miscreants, allegedly Shiv Sena workers.

Among the many tweets on the incident is that of activist-turned-politician Arvind Kejriwal who said, "Police officers who arrested the two girls in Mumbai shud be immediately dismissed. That's minimum that the govt ought to do."

Sources said top cops at the police headquarters in Mumbai were livid with the Palghar police. "We have ordered an inquiry...if any further action needs to be taken the probe team will decide and send a report. On this report we will act," Deven Bharti, IG (Law and Order), Maharashtra Police said.

Promoted
Listen to the latest songs, only on JioSaavn.com
Shiv Sena chief Bal Thackeray's death on Saturday afternoon had brought the city to a virtual standstill for the weekend, with shops and other establishments shutting and taxis going off the roads, amid fears of violence by Mr Thackeray's supporters. There was, however, no untoward incident in Mumbai over the weekend. Mr Thackeray was cremated at the Shivaji Park on Sunday evening with nearly two lakh people in attendance.