The video, tweeted by Congress's social media in-charge, shows a group of people holding Indian flags rushing to the aid of the former Minister. 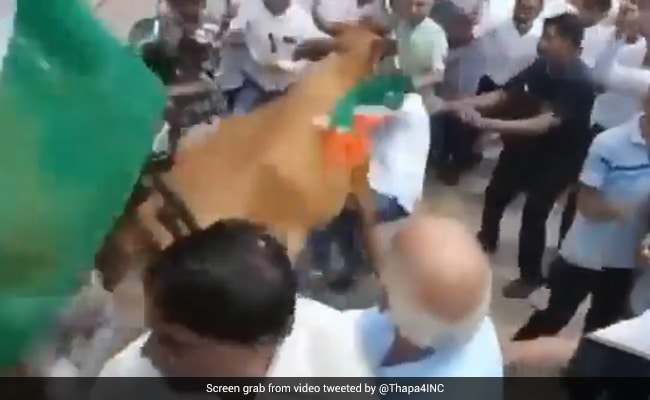 Former Gujarat Deputy Chief Minister Nitin Patel today suffered injuries in his left leg after a galloping cow rammed into the "Tiranga Yatra" being led by him in the Kadi town of Mehsana district of the state. He suffered a minor fracture in his left leg during the incident, the BJP leader said.

"A Tiranga Yatra had been organised at Kadi where nearly 2,000 people participated. It had completed almost 70 per cent of the distance and reached a vegetable market when a cow suddenly came running," Mr Patel has said.

In the commotion, he and a few others were thrown down to the ground, he added.

In a video clip of the incident, Mr Patel could be seen holding a tricolour while surrounded by a group of people when a galloping cow crashes into the gathering hitting several people in the way. It brushed past Mr Patel who could be seen losing his balance and falling to the ground.

Mr Patel was taken to a private hospital where X-ray and CT scan showed that he had a minor fracture in his left leg, the BJP leader informed the media.

"The doctors fixed a temporary splint to stabilize the leg and advised me to take rest for 20-25 days," he said.

The video shows a group of people holding Indian flags rushing to the aid of the former Minister after he is hit.

Another tweet by a Gujarat Aam Aadmi Party leader shows Mr Patel in a wheelchair with bandages on his left leg being escorted by security guards.

He is former Dy. CM @Nitinbhai_Patel today he got injured by a running cow. May Allah grant him speedy recovery.

Questions that come to my mind

A herd of cattle had reportedly entered the procession and caused a commotion.

Mr Patel was Deputy Chief Minister and Health Minister in the previous Vijay Rupani-led government in the state.