The students have been waiting for evacuation since Saturday -- the foreign ministry said the main challenges were the ongoing shelling, violence and the lack of transportation. 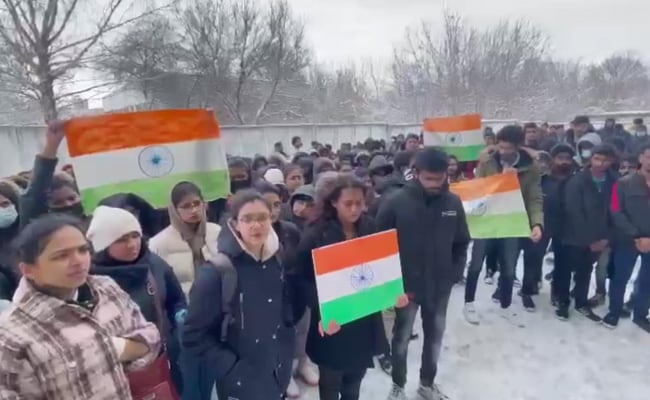 On Saturday, the students said they would move to the Russian border.

The evacuation of around 700 Indian students stranded in battle-torn Ukraine's Sumy was put on hold again today as Ukraine vetoed the Russian idea of a humanitarian corridor from three of its cities to Russia and Belarus, calling it an "unethical stunt". The "corridors" were to be opened from Kyiv, Mariupol and the eastern cities of Kharkiv and Sumy.

The students said they have been waiting for evacuation since Saturday -- the foreign ministry said the main challenges were the ongoing shelling, violence and the lack of transportation. An Indian team from the embassy has been on stand-by at Poltava - nearly a three-hour drive from Sumy - to coordinate the safe passage of the students.

On Saturday, unable to cope with the bitter cold, depleting food and water supplies, the students shared videos saying they have decided to take a risky journey to the Russian border 50 km away.

But they were dissuaded by the government, which contacted them and asked that they "avoid unnecessary risks".

Under the Russian evacuation plan, the corridor from Kyiv would lead to Belarus, while civilians from Kharkiv would be permitted to go only to Russia, according to maps published by the Russian state-owned RIA News agency. Russia also said it would begin airlifts to take Ukrainians from Kyiv to Russia.

A spokesperson for Ukrainian President Volodymyr Zelensky, however, called the move "completely immoral" and said Russia was trying to "use people's suffering to create a television picture".

"They are citizens of Ukraine, they should have the right to evacuate to the territory of Ukraine," news agency Reuters quoted the spokesperson as saying.

"This is one of the problems that is causing the humanitarian corridors to break down. They seem to agree to them, but they themselves want to supply humanitarian aid for a picture on TV, and want the corridors to lead in their direction," he added.

Sources said PM Modi urged President Putin to hold direct talks with President Zelensky, in addition to the ongoing negotiations between their teams.