The Uttar Pradesh Election Commission said the machines were changed instantly and the voting went on without any further hitch. 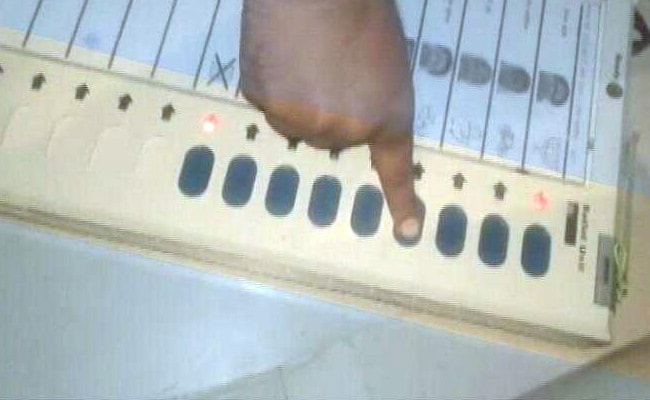 Lucknow: Allegations of Electronic Voting Machines favouring the BJP have once again surfaced in Uttar Pradesh -- this time in the local body elections in Meerut and Kanpur.

A cellphone video circulating on Twitter, reportedly shot by a local journalist, shows a voter describing in detail how he is trying to vote for the Bahujan Samaj Party but the buttons lighting up on the EVM are for the BJP. Another button, however, can be seen lit at the same time - that of the NOTA option. The voter then says this is a case of fraud, favouring the BJP, currently in power in the state.

In Kanpur, allegations of malfunctioning EVMs came from two polling booths. In both cases, voters and some candidates alleged no matter which button was being pressed, the machine was registering the vote in favour of the BJP.

In both instances, the police had to intervene to keep the peace. The state Election Commission said the machines were changed instantly and the voting went on without any further hitch.

In March, after a resounding loss to the BJP in the state assembly polls, former chief minister Mayawati had alleged largescale tampering of Electronic Voting Machines. Denying the accusations, the Election Commission had issued a hackathon challenge, but there were no takers for it.

Promoted
Listen to the latest songs, only on JioSaavn.com
This time, state Election Commission SK Agarwal said it is impossible to "tinker" with the machines.

"Even in the video that is circulating, assuming it is authentic, you can clearly see two buttons are lighting up and not just one. So this is a case of malfunction. Why would someone tinker with just one or two machines?" he said.