The Election Commission on Wednesday had turned down the demand by 22 opposition parties to tally the VVPAT (Voter Verified Paper Audit Trail) slips with the Electronic Voting Machines before the counting of votes. 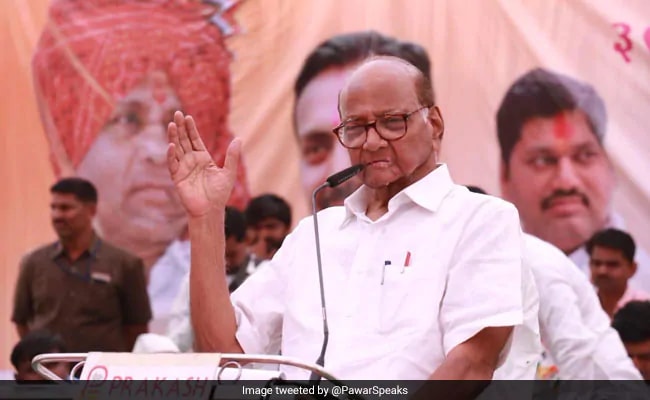 Election Result: The NCP was one of the parties that repeatedly raised concern about EVMs.

National Congress Party Sharad Pawar today said he would not "blame the voting machines" after the leads indicated that the ruling BJP will come back to power with a clear majority.

"Doubts were indeed raised (about the voting machines). But I don't want to blame the machines now that the result is out. Once the verdict is out, it has to be accepted gracefully and I am accepting it gracefully," Mr Pawar was quoted as saying by news agency PTI.

The Election Commission on Wednesday had turned down the demand by 22 opposition parties to tally the VVPAT (Voter Verified Paper Audit Trail) slips with the Electronic Voting Machines before the counting of votes.

The NCP was one of the opposition parties that repeatedly raised the concern about EVM tampering.

"Congress had performed really well in Rajiv Gandhi's time but nobody doubted elections then. Same happened when Atal Bihari Vajpayee won," he further said, adding that the Congress had won around 400 seats under former Prime Minsiter Rajiv Gandhi's leadership in 1984.

With the ruling BJP set to return for a second consecutive term at the centre, Prime Minster Narendra Modi this afternoon tweeted: "India wins yet again"

"Together we grow. Together we prosper. Together we will build a strong and inclusive India. India wins yet again! #VijayiBharat," he wrote.

In Mahrashtra, which sends 48 lawmakers to the parliament, the NCP-Shiv Sena alliance is trailing behind the BJP-Shiv Sena combine. The final result are likely to be declared by late evening.