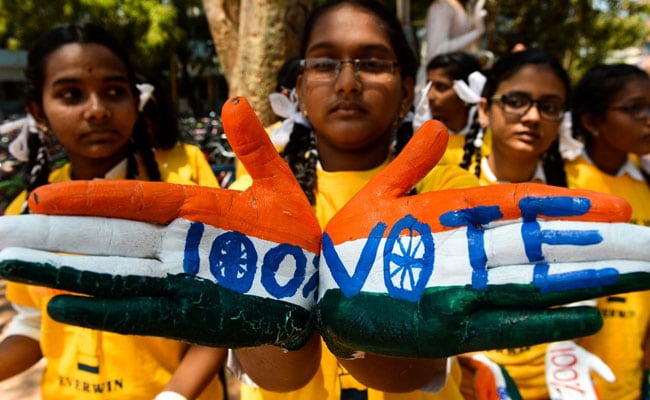 Assembly Election: Polls in all 5 states will be held amid a massive surge in Covid cases (File)

In a big jolt to the BJP and Yogi Adityanath just before the Uttar Pradesh election, senior leader Swami Prasad Maurya today quit as minister and joined rival Samajwadi Party of Akhilesh Yadav. Moments after he posted his resignation letter on Twitter, another MLA, Roshan Lal Verma, announced his resignation.

Rahul Gandhi has not discussed the possibility of an alliance with Mamata Banerjee's Trinamool Congress in Goa ahead of the state elections next month, senior Congress leader KC Venugopal tweeted Monday night, stressing that his party is "confident - we will put Goa back on the path to progress soon".

Meanwhile, actor Sonu Sood's sister, Malvika Sood, will contest the Punjab polls representing the Congress party. Punjab will vote in a single phase on February 14. The votes will be counted on March 10. The actor, whose work during the Covid crisis has earned him rich praise, said he supports his sister.

One of the tallest Congress leaders in Uttar Pradesh, Imran Masood, will join Akhilesh Yadav's Samajwadi Party in a big setback for the grand old party. Former Congress MLA Imran Masood has said only Akhilesh Yadav's party can defeat the BJP, whose campaign is being led by Chief Minister Yogi Adityanath.

Here are the Highlights on Assembly Election 2022:

Get NDTV UpdatesTurn on notifications to receive alerts as this story develops.
Jan 11, 2022 19:41 (IST)
UP Polls: Parties Struggle To Maintain Covid Protocol At Their Offices
Though the Election Commission has banned poll rallies till January 15, the surge in Covid cases in Uttar Pradesh has failed to dampen the spirits of ticket-seekers and their supporters at the offices of major political parties, reported news agency PTI.

The roads leading to the Samajwadi Party office at Vikramaditya Marg were nearly choked on Tuesday with SUVs of leaders and their supporters parked haphazardly on both sides.

The road outside Janeshwar Mishra Trust, which is linked to the SP office and used by party president Akhilesh Yadav to meet leaders, was similarly jammed.

A local shopkeeper said it is the same scene at the SP office every day.

Jan 11, 2022 19:37 (IST)
SP Maurya Exits Team Yogi For Akhilesh Yadav: This Is Why
Swami Prasad Maurya, who seems to be leading an exodus from the BJP just weeks before the Uttar Pradesh election, had been exploring change with rival Akhilesh Yadav for some time, sources say.

Swami Prasad Maurya reportedly got a hint from the BJP that his supporters may not be the party's candidates for the February-March polls.

Mr Maurya, a powerful OBC (Other Backward Class) leader, has taken along a loyal group of leaders in his political travels from Mayawati's Bahujan Samaj Party (BSP) to the BJP in 2016 and to the Samajwadi Party now.

Jan 11, 2022 19:06 (IST)
UP Election 2022: UP Minister's Tailor Shop Visit In Lucknow In Bid To Stitch Alliance With People
Attempting to stitch an alliance with the people, UP Law minister Brajesh Pathak on Tuesday tried his hand on a sewing machine at a tailor's shop in the state capital and claimed that people will "contest" the assembly elections for him.

Mr Pathak was seen stitching a green piece of cloth at the tailor's shop.

Jan 11, 2022 18:15 (IST)
Congress, Take Note - A New Warning From Navjot Sidhu
It is the people of Punjab who will decide who will be the Chief Minister and not the party high command, Navjot Singh Sidhu dropped this truth-bomb while answering mediapersons today.

The latest Siduism, a month before Punjab votes (On February 14), is likely to raise hackles in the Congress's Punjab unit and among senior leaders.

Jan 11, 2022 17:14 (IST)
The Significance Of The Minister Who Quit In Uttar Pradesh: 5 Points
In a major setback for the BJP weeks ahead of the state assembly elections in Uttar Pradesh, a key minister along with three MLAs has quit the party. Swami Prasad Maurya, a top UP minister, and influential backward caste leader, has joined the Akhilesh Yadav-led Samajwadi Party.
Jan 11, 2022 16:24 (IST)
In Talks With Congress And Trinamool For Goa Alliance, Says Sharad Pawar
The Nationalist Congress Party is in talks with Mamata Banerjee's Trinamool Congress and the Congress to fight the Goa assembly elections together, NCP chief Sharad Pawar said today.

"Trinamool, NCP and Congress are holding discussions. We have given our choice of seats to them. A decision will be made soon," Mr Pawar said.

Goa will vote on February 14.

Jan 11, 2022 15:53 (IST)
UP Election 2022: "Why Remember Me Today?" Uttar Pradesh Minister To NDTV On Why He Quit
Swami Prasad Maurya, a senior BJP leader who quit as Uttar Pradesh minister and joined the Samajwadi Party of Akhilesh Yadav, displayed confidence that for the third time in a row he is joining the winning side just before elections.

Mr Maurya quit Mayawati's Bahujan Samaj Party (BSP) for the BJP in 2016 - before the 2017 Uttar Pradesh election - and has now joined the Samajwadi Party on the verge of another election.

Jan 11, 2022 15:44 (IST)
UP Election 2022: BJP Launches 'Door-To-Door' Campaign In UP After Moratorium On Rallies
With the Election Commission putting a moratorium on holding public rallies and gatherings in view of spurt in coronavirus cases, the BJP on Tuesday launched its door-to-door campaign to reach out to voters across the Uttar Pradesh.

Starting the campaign in the state capital Lucknow, UP BJP chief Swatantra Dev Singh knocked doors of houses in Ballu Adda area and pasted stickers outside the homes and also applied 'tilak' on the forehead of some house owners.

Mr Maurya, the Uttar Pradesh Deputy Chief Minister, later called it an "unfortunate incident", according to the broadcaster.

In the BBC video, the interviewer asks Mr Maurya about the religious conclave and the silence of top leaders of the party, including UP Chief Minister Yogi Adityanath, on hate speeches.

Jan 11, 2022 14:33 (IST)
A Key UP Minister Quits Ahead Of Election, Joins Akhilesh Yadav
In a big exit from the Yogi Adityanath-led BJP government just before the Uttar Pradesh election, Swami Prasad Maurya has quit as minister and switched to the rival Samajwadi Party of Akhilesh Yadav. Reports suggest he may take a few more MLAs with him.

"Despite a divergent ideology, I worked with dedication in the Yogi Adityanath cabinet. But because of the grave oppression of Dalits, OBCs, farmers, unemployed and small businessmen, I am resigning," Swami Prasad Maurya wrote in a stinging resignation letter.

Jan 11, 2022 13:35 (IST)
Uttarakhand Election 2022: BJP To Deploy IT Experts In Uttarakhand For Virtual Rallies, Meetings
With COVID-19 restrictions in place ahead of Uttarakhand Assembly elections, the Bharatiya Janata Party (BJP) has now decided to make use of technology and has decided to deploy one IT expert in every constituency of the state to expedite the party's meetings, virtual rallies, campaigns and other programmes.

The decision of the party comes after the Election Commission of India barred political parties from organising roadshows and rallies till January 15.

Jan 11, 2022 12:37 (IST)
UP Assembly Polls: UP BJP Chief Sat Next To Covid +ve Colleague, On Poll Campaign Day Later
A top BJP leader who is in charge of the party's affairs in Uttar Pradesh has tested positive for COVID-19. Radha Mohan Singh, who is also national vice president of the BJP, had attended a meeting of the party's top leaders in Lucknow last night, where UP Chief Minister Yogi Adityanath and UP BJP chief Swatantra Dev Singh were also present.

In visuals of the party meeting last night, Radha Mohan Singh in a blue jacket is seen sitting next to Swatantra Dev Singh in the centre, to whose left is Yogi Adityanath.

While Radha Mohan Singh is said to have gone into self-isolation, Swatantra Dev Singh has gone ahead with the BJP's door-to-door campaign this morning for the seven-phase assembly elections to be held starting February 10.

Jan 11, 2022 12:02 (IST)
UP Leader, Who Quit Congress, Booked For Violating Model Code of Conduct
A case has been filed against former MLA Imran Masood, who is quitting Congress and is likely to join the Samajwadi Party, and 10 others for holding a meeting with party workers and supporters in poll-bound Uttar Pradesh's Saharanpur without prior permission, thus violating COVID-19 protocols and Model Code of Conduct (MCC) as well.

According to police official Rajesh Kumar, a case has been filed under various sections of the Indian Penal Code (IPC).

"Imran Masood called a meeting with his supporters. They had not taken any permission for that, violating COVID norms as well as the Model Code of Conduct. Social distancing rules were also violated," Mr Kumar said.

The numbers cited by the Chief Minister roughly correspond to the ratio of Hindus to Muslims in UP, where assembly elections are due next month. Uttar Pradesh has 79.73 per cent of Hindu population, Muslim population is at 19.26 per cent, Christians are 0.18 per cent and Sikhs are at 0.32 per cent, according to the census.

"It's not the Muslims that Yogi had talked about, I will give you the details of the 20%. This 20% consists 9 per cent of criminals and anti-social elements, 3.5% are land grabbers, 2% are those who commit atrocities against women, people who are pro-Pakistan are 2%, people who are against 'Vande Mataram' are 1.5%. These people consist of that 20 per cent," said BJP's Alok Vats on NDTV's Trending Tonight show.