Durga Puja 2019: All You Need To Know About Durgotsava

Durga Puja: Goddess Durga, accompanied by her four children - Ganesh, Kartik, Lakshmi and Saraswati - descends on earth every year to visit her parents and to fight evil. 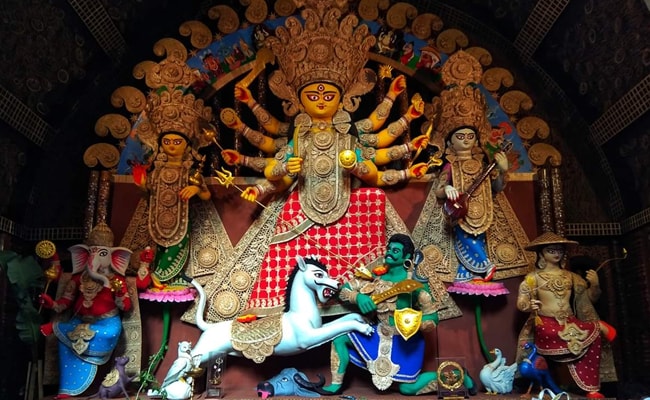 Durga Puja is a five-day celebration and is a major festival of Bengal.

Durga Puja or Durgotsava is a five-day celebration that begins on October 4, Friday, and will continue till October 8, Tuesday. The five days are - Shashthi, Maha Saptami, Maha Ashtami, Maha Navami and Vijayadashami. Durga Puja celebrations run parallel with Navratri, a Hindu festival where nine forms of Goddess Durga are worshipped. For Durga Puja celebrations, huge pandals with idols of Goddess Durga are set-up and devotees come in large numbers to offer prayers to the goddess. During the Durga Puja festive season, devotees wear new clothes, indulge in sweet and traditional food and enjoy cultural programmes. Durga Puja is a major festival of Bengal, but is celebrated across India and the world.

The rituals that start off on Shashthi come to an end on Dashami, when the idols of the goddess are immersed by teary-eyed devotees in ponds, lakes and riverse.

It is believed that during Durga Puja, Goddess Durga, accompanied by her four children - Ganesh, Kartik, Lakshmi and Saraswati - descends on earth every year to visit her parents and to fight evil. Goddess Durga who killed demon Mahishasur comes sitting on a lion mount and wields an array of weapons in her 10 hands in symbolic representation of Shakti, or woman power.