In 2018 the Supreme Court said the arrest of Dr Nambi Narayanan over the 1994 espionage case was needless, and it also granted him Rs 50 lakh compensation 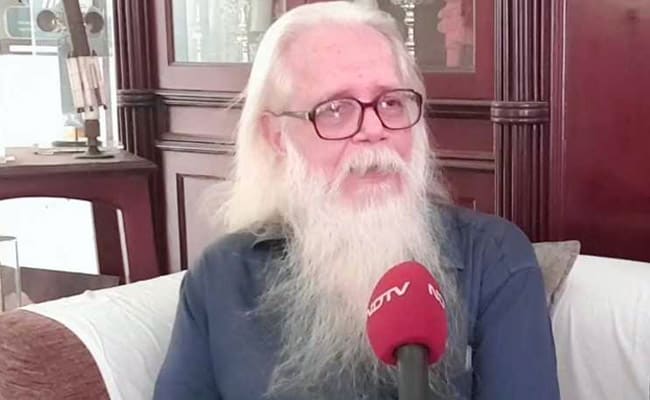 The CBI must proceed against ex-Kerala Police officers who framed former ISRO aerospace scientist and Padma Bhushan awardee Dr Nambi Narayanan, the Supreme Court said on Monday, noting that the investigation must move forward since the agency had filed an FIR.

The court, however, said the CBI must collect material without relying on the report of the Justice Jain committee - the three-member panel set up after it acquitted Dr Narayanan in 2018.

"CBI can proceed after registration of FIR... as per law and no directions required from this court. The respondent can take all possible remedies available in law... further, after registration of FIR, CBI must collect material on its own and not proceed on basis of report submitted by Jain committee," a two-member bench of Justices AM Khanwilkar and Sanjiv Khanna said.

The bench said that the report could not, by itself, be basis to act against the accused.

The accused had wanted access to the report, arguing that the CBI's refusal to share the report was prejudicing their defense, and that the agency was relying heavily on its contents.

The court, however, said the report was not relevant at this time as the CBI had already registered an FIR, and that it was, in any case, only to help it understand the case. The court underlined its instructions - that the CBI would act independently to collect evidence and other materials.

Solicitor-General Tushar Mehta, appearing for the central agency, pointed out that an earlier order of the court (on April 15) prohibited the publication of the Jain committee report. Mr Mehta added that the FIR, anyway, contained the gist of the report and would be uploaded soon.

The court, acting on a suggestion from Additional Solicitor General SV Raju, also wound up the Justice Jain committee, noting that "it may cease to function".

The court was hearing a plea by the CBI on the involvement of Kerala Police officers in the framing of Dr Narayanan, who was accused in a 1994 espionage case and later cleared.

The CBI had submitted its report to the court in a sealed condition, per its order. The court also took into record the Justice Jain committee report, which had also been given - sealed - in March.

In 2018 the court held that the arrest of Dr Narayanan was needless and unnecessary. It also granted him compensation of Rs 50 lakh for harassment and mental agony.