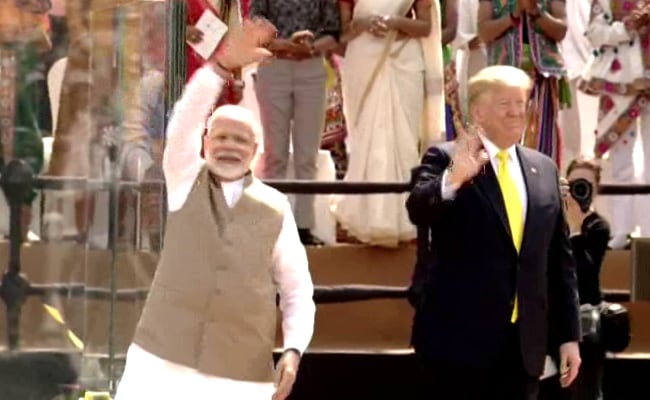 PM Modi said the Trumps' visit showed the importance and the closeness of India-US ties.

With US President Donald Trump and First Lady Melania Trump seated beside him, Prime Minister Narendra Modi today began their joint mega event at Ahmedabad by saying "Namaste, Trump" thrice. The two leaders hugged for the second time on the stage at the Motera cricket stadium.

"India, US relation is no longer just another partnership. It is now a far greater, closer relationship," said the Prime Minister.

PM Modi said the Trumps' visit showed the importance and the closeness of India-US ties.

The newly-built stadium, which has a capacity of 1.1 lakh, was packed to the rafters, meeting President Trump's expectations of being welcomed by "millions". The seats, in the Indian team's blue and orange colours, were covered by tens of thousands of people wearing white caps; some wore saffron scarves and danced as they waited for the two leaders.

President Trump drove to the stadium in his black armoured vehicle, the Beast, after a visit to Mahatma Gandhi's Sabarmati Ashram with First Lady Melania Trump.

The Trump tried their hand at Gandhi's charkha or spinning wheel and were treated to snacks like broccoli samosa and apple pie in their short visit.