Doctors' Strike Live Updates: The junior doctors said that they are withdrawing the strike after a successful meeting with the chief minister this evening. 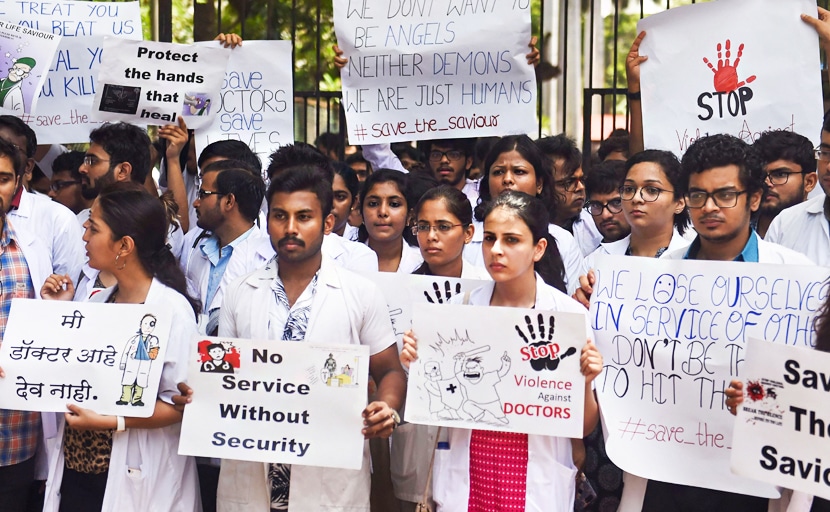 The protesting doctors in West Bengal on Monday agreed to withdraw their week-long stir after Chief Minister Mamata Banerjee announced steps to scale up security at hospitals. An assurance to call off the strike came at a meeting Ms Banerjee held with representatives of the striking doctors at the state secretariat. "We are satisfied with the meeting," a representative of the doctors said, assuring Ms Banerjee that the strike is going to be called off. A formal announcement on withdrawal of the strike is likely to be made from the epicentre of the protest, the NRS Medical College and Hospital.

Healthcare services at several government and private hospitals in parts of the country were hit as scores of doctors have decided to boycott work for a day in support of their striking colleagues in West Bengal. The Indian Medical Association (IMA) had given the June 17 doctors' strike call with the withdrawal of non-essential health services across the country. IMA members will also stage a dharna at its headquarters in the national capital.

All outpatient departments (OPDs), routine operation theatre services and ward visits will be withdrawn for 24 hours from 6 am on Monday to 6 am Tuesday, the IMA said. Emergency and casualty services will continue to function, it said. The Doctors' Strike comes amid allegations that a resident doctor at the country's top medical institute AIIMS in Delhi was abused by the relatives of a patient around 1 am on Sunday.

The junior doctors in Bengal, who had so far refused Chief Minister Mamata Banerjee's appeal for talks, softened their stand on Sunday. "We are keen to end this impasse. We are ready to hold talks with the chief minister at a venue of her choice, provided it is held in the open, in the presence of media persons, and not behind closed doors," a spokesperson of the doctors said after a two-hour meeting.

Here are the highlights from the Doctors' Strike: 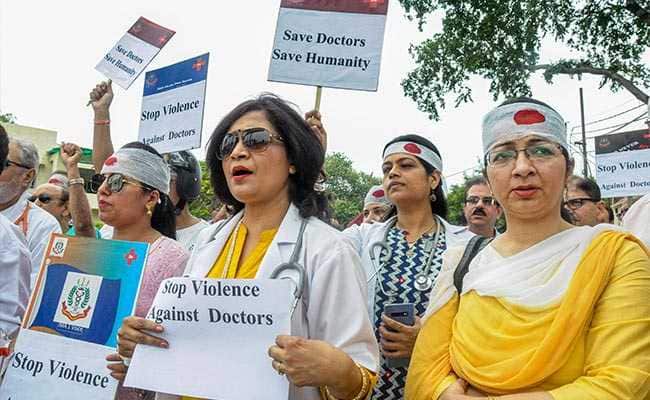 Jun 17, 2019 17:36 (IST)
Doctors'strike: "We had police forces posted in hospitals but now we need to streamline the entry of patient parties," said Kolkata police chief, Anuj Sharma, who was present at the meeting of junior doctors and Mamata Banerjee. 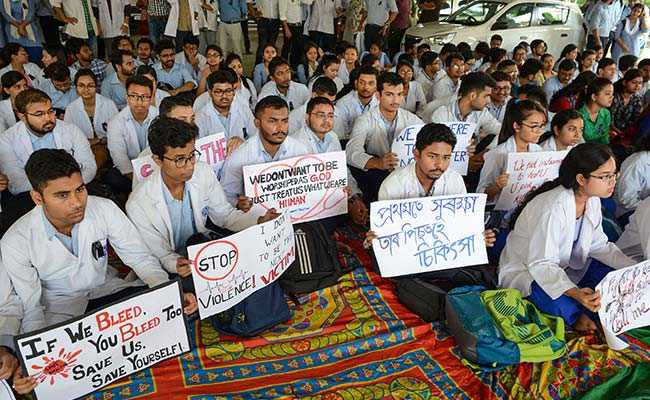 Jun 17, 2019 17:17 (IST)
Chief Minister Mamata Banerjee today suggested 10-point security measures for safety of doctors in hospitals that would prevent a recurrence of attacks by relatives of patients. At a meeting today with 24 representatives of junior doctors, she said one of the key measures could be the creation of an interface between the doctors and patients. She also suggested stationing a senior police officer at each hospital and streamlining the entry of patient's attendants in the emergency section.
Jun 17, 2019 16:53 (IST)
Chief Minister Mamata Banerjee said she suggested that there should not be more than two relatives inside the emergency.
Jun 17, 2019 16:39 (IST)
Mamata Banerjee Meets Doctors' Representatives, Talks On: 10 Points Jun 17, 2019 16:37 (IST)
Chief Minister Mamata Banerjee is meeting with 24 representatives of the striking junior doctors at the state secretariat, in presence of the media. The doctors -- who want to end the impasse - had insisted on a public negotiation. The strike, called after a junior doctor was assaulted by the relatives of a deceased patient, has spread.
Jun 17, 2019 15:52 (IST)
Mamata Banerjee Arrives For Meeting With Doctors
West Bengal: Chief Minister Mamata Banerjee arrives for meeting with representatives of doctors at Nabanna.

Jun 17, 2019 14:12 (IST)
Government doctors in Himachal Pradesh wore black bands to express solidarity with their protesting colleagues in West Bengal. In a meeting held at Indira Gandhi Medical College and Hospital, members of the Residents Doctors Association (RDA) decided not to observe a strike to take care of the admitted patients, said IGMC RDA general secretary Dr Bhartendu Negi.
Jun 17, 2019 12:18 (IST)
Bengal Government Invites Doctors For A Meeting
The Bengal government has sent letters to junior doctors asking them to come for talks at 3pm. Two representatives each from 14 medical colleges have been asked to report at Nabanna, which houses the chief minister's office, by 2:30pm today.
There is no word on the presence of media during the meeting.
Jun 17, 2019 12:10 (IST)
Why AIIMS Doctors Went On Strike
A doctor at the Trauma Centre of Delhi's prestigious All India Institute of Medical Sciences (AIIMS) was allegedly abused and threatened by the attendant of a patient last night, pushing the doctors to join the nationwide medical strike today.
The AIIMS doctors had initially said they would hold a protest march, but won't strike work since patient care is a priority. But the situation changed after last night.
At the AIIMS Trauma Centre today, doctors said last night, when an injured patient had come in, the physician on duty had got to him after attending to the critical patients. "This was because the patient was what we call low risk. But the attendant of the patient, who was drunk, verbally abused him and said, 'unless you see him now, I will kill you'," said Dr Amrinder Singh Malhi, the chief of the Resident Doctors' Association.
Jun 17, 2019 11:51 (IST)
Doctors' Protest in Bhubaneswar

Bhubaneswar: Doctors continue to hold protest at All India Institutes of Medical Sciences, in the wake of violence against doctors in West Bengal. #Odishapic.twitter.com/Z90aV8owDz

Jun 17, 2019 11:45 (IST)
Supreme Court To Hear Plea On Safety Of Doctors
The Supreme Court says it will hear on June 18 (Tuesday) a plea seeking safety and security of doctors in government hospitals across the country. A vacation bench of Justices Deepak Gupta and Surya Kant have agreed to list the matter after the counsel appearing for the petitioner, advocate Alakh Alok Srivastava, sought urgent hearing.
The plea was filed on Friday in the wake of protests by doctors in West Bengal against assault on their colleagues by the family of a patient, who died on Monday night.
The petition has also sought directions to Union ministries of home affairs and health and West Bengal to depute government-appointed security personnel at all state-run hospitals across the country to ensure safety and security of doctors.
Jun 17, 2019 11:23 (IST)
More than 40,000 doctors in Maharashtra are boycotting work as part of the strike. Doctors, from various government and private hospitals in the state, are mainly boycotting the OPD (Out-Patient Department) and other non-essential health services.
Jun 17, 2019 11:03 (IST)
"Mamata Banerjee is responsible for the crisis happening in our country. She mismanaged the issue in Bengal," says Union Minister and BJP leader Babul Supriyo.
Jun 17, 2019 10:44 (IST)
Doctors on strike at King George's Medical University in Lucknow, Uttar Pradesh, in the wake of violence against doctors in West Bengal. 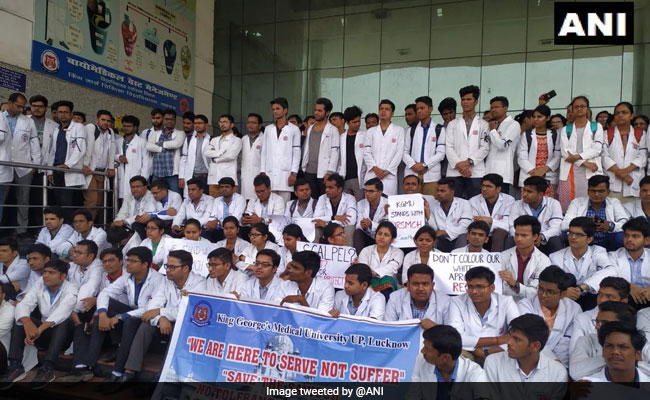 Jun 17, 2019 09:36 (IST)
AIIMS Doctors To Go On Strike
Resident Doctors' Association of All India Institute of Medical Sciences (AIIMS) to go on strike from 12 noon today till 6 am tomorrow, in support of violence against doctors in West Bengal.
In a statement, AIIMS junior doctors said they won't report to duty from noon today till 6 am tomorrow in protest against the alleged abuse one of their colleagues had gone through on Sunday. Intensive care units and emergency services will remain open.
The junior doctors at AIIMS also marched in protest on the campus this morning, as planned, to show solidarity to the protesting doctors in Bengal. The AIIMS resident doctors said they will meet Union Health Minister Harsh Vardhan and ask for better security.

Jun 17, 2019 09:14 (IST)
Karnataka Chief Minister HD Kumaraswamy on Twitter says: "Assault on anyone is unacceptable. I condemn the attack on the doctors and request the doctors on strike today to ensure that their protest is peaceful and does not cause any problems to the patients."
Jun 17, 2019 09:12 (IST)
Doctors at Sir Sayajirao General Hospital in Vadodara, Gujarat, hold protests outside Out Patient Department.

Gujarat: Indian Medical Association today has called for a nationwide strike of doctors in the wake of violence against doctors in West Bengal; Doctors at Sir Sayajirao General Hospital in Vadodara hold protest outside Out Patient Department pic.twitter.com/Ya6NS3CE3x

Jun 17, 2019 08:47 (IST)
Doctors in Kerala from both private and state-run hospitals have also gone on strike. While doctors from the private sector opted for a day-long strike with just the casualty services to be made available, those in the government sector would remain off duty for two hours from all out-patient services from 8 am to 10 am.
Jun 17, 2019 08:33 (IST)
All medical colleges and government hospitals in Assam will keep their OPDs shut in solidarity with the strike called by the Indian medical Association. However, all emergency services, critical care and trauma services will operate as usual.
Jun 17, 2019 08:13 (IST)
Doctors at the Centre-run Safdarjung Hospital, Lady Hardinge Medical College and Hospital, RML Hospital as well as Delhi government facilities such as GTB Hospital, Dr Baba Saheb Ambedkar Hospital,Sanjay Gandhi Memorial Hospital and Deen Dayal Upadhyay Hospital will not function on Monday.
Jun 17, 2019 08:13 (IST)
Union health minister Dr Harsh Vardhan has asked states to draw up laws to safeguard the doctors. But the IMA has called for a comprehensive law in dealing with violence on doctors and healthcare staff. It also wants security measures to be specified.
Jun 17, 2019 08:12 (IST)
Hospitals from several states have responded to the call of the Indian Medical Association for a nationwide strike.
In Delhi, doctors' will hold a march in support of their colleagues in West Bengal.