Amit Shah, earlier today, launched a full-scale attack on Ms Banerjee and her Trinamool Congress, and declared in Kolkata that the centre will take the National Citizenship Registry across the country. 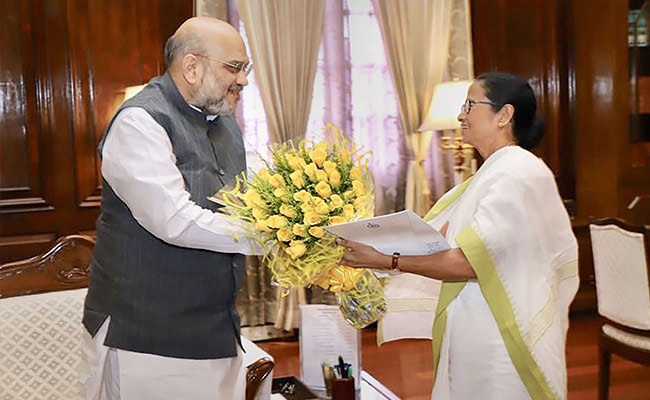 Mamata Banerjee had met Amit Shah last month in Delhi and flagged the issues of NRC..

Mamata Banerjee today said divisive politics will not work in West Bengal after Union Home Minister and BJP President Amit Shah said the Chief Minister was keen on keeping infiltrators in the state to expand her voter base. "Everyone is welcome to our state and enjoy the hospitality of our people. But please don't profess any divisive politics ... It will not work in Bengal," Ms Banerjee said.

"Please don't spread the religion of divisive politics. Please don't create rift among people. Bengal is known to respect leaders of different faiths for ages. This can never be spoilt," she said inaugurating a community puja in south Kolkata, according to news agency PTI.

Amit Shah, earlier today, launched a full-scale attack on Ms Banerjee and her Trinamool Congress, and declared in Kolkata that the centre will take the National Citizenship Registry across the country and "no matter how much the Trinamool Congress opposes it, the BJP will get it done".

"Didi used to oppose these same people when they voted for Communists. Now that they are voting for her, she wants to keep them," he said. Accusing the Trinamool chief of putting her party's interest first, he said, "We cannot let national interest come ahead of any party's interest".

"People of Bengal are being misled about the NRC... I assure all Hindu, Buddhist, Sikh, Jain refugees that they won't have to leave the country ... They will get Indian citizenship and enjoy all the rights of an Indian national when the Citizenship Amendment Bill is passed in Parliament," Amit Shah said.

Mamata Banerjee had met Amit Shah last month in Delhi and flagged the issues of citizens' register. Pointing out that 19 lakh people, many of whom were "genuine voters" have been left out of the citizenship registry in Assam, she had told him that the exercise is not required in Bengal.

The implementation of the citizens' list in Assam has been widely criticised owing to the omissions. Even a section of BJP leaders in Assam criticised it, claiming the list left out a number of Bengali Hindus who were among the party's core voter group.