The 45-second clip showed the rescuers pulling the man, later identified as Sunil Kumar from Kangra's Shahpur, over the nullah using the rope. 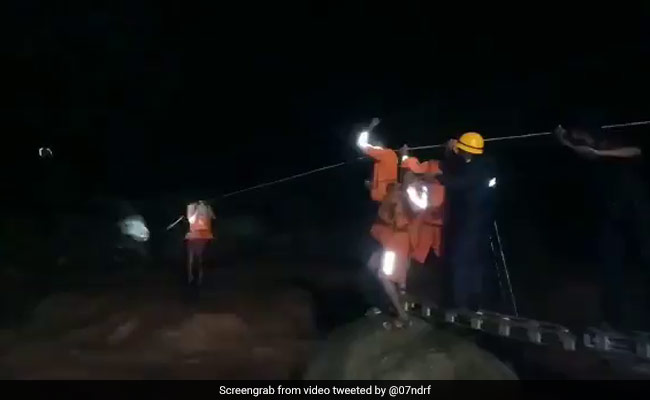 In a difficult midnight operation, rescue teams saved a man trapped between two nullahs (drains) following a cloudburst in Himachal Pradesh's Dharamshala, which triggered a flash flood. The National Disaster Response Force (NDRF) officials pulled a rope using climbing gear and saved the man from getting washed away by the strong current. A video of the operation has been shared on social media. It showed how darkness complicated the effort of the officials, who worked with flash lights but saved man after hours-long operation.

The 45-second clip showed the rescuers pulling the man, later identified as Sunil Kumar from Kangra's Shahpur, over the nullah using the rope.

In a most difficult and Technical operation precious life of Sunil of vill Rajol,Shahpur Kangra was saved by NDRF during the midnight. victim was trapped between two seasonal nullahs in spate due Flash Floods in Dharamsala and areas around yesterday. @satyaprad1@NDRFHQ@PIBpic.twitter.com/xhSMY5BwdE

On Monday, NDRF Director General S N Pradhan had shared a few images of the rescue effort. They showed Mr Kumar stranded on the other side of the gushing flood water drain and officials from 7th Battalion of NDRF from Bathinda in Punjab and local rescuers trying to rig a ropeway to bring the man to their side.

Over the past few days, heavy rainfall has lashed Kangra district. The rainfall has led to the flooding of several smaller streams.

On Monday, a flash flood in Dharamshala washed away vehicles and damaged properties in Bhagsu Nag area. Residents and authorities shared frightening videos of the flash flood.

The weather department has forecast heavy rainfall today as well. Dr Nipun Jindal, the Deputy Commissioner of Kangra, said on Twitter that the weather from July 14 to July 16, too, is predicted to be bad.

With tourists headling to the hill station in large numbers despite warnings by authorities of a possible third wave of COVID-19, district officials have issued an advisory and asked people to put their travel plans on hold, at least until the rain stops. Dr Jindal has asked those tourists who are already in Dharamshala to stay put because the heavy rain has damaged roads.