Narottam Mishra has given a 24-hour ultimatum to Sabyasachi to remove the ad. (File)

India's season of retracted ad campaigns found its newest corporate patron on Sunday in fashion designer Sabyasachi Mukherjee's label as it pulled promotional material for its mangalsutra collection after a Madhya Pradesh minister threatened to send the police after him.

"In the context of making heritage and culture a dynamic conversation, the Mangalsutra campaign aimed to talk about inclusivity and empowerment. The campaign was intended as a celebration and we are deeply saddened that it has instead offended a section of our society. So we at Sabyasachi have decided to withdraw the campaign," the company said in a statement.

The move came after Madhya Pradesh Home Minister Narottam Mishra on Sunday issued a 24-hour ultimatum to Mr Mukherjee, demanding that he withdraw the advertisement with an "objectionable and obscene" portrayal of mangalsutras - the traditional Hindu necklace for married women - else face arrest. 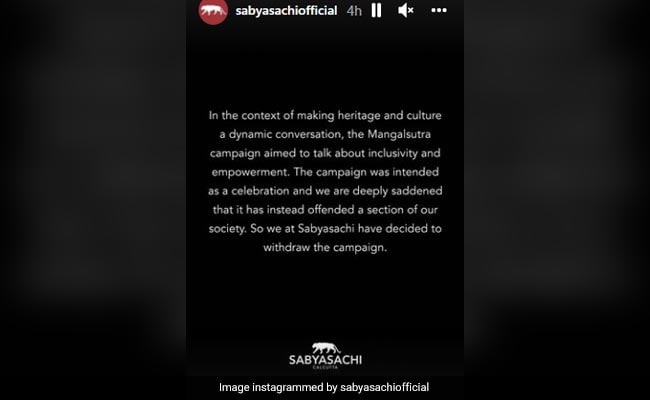 The mangalsutra advertisement by Sabyasachi's brand featured intimate portraits of women and men. After the designer shared these pictures, it sparked controversy as a section of social media users deemed it "against Hindu culture" and "obscene".

Talking to reporters at Datia in the state, Mr Mishra had said, "I have warned earlier about such advertisements. I am personally warning designer Sabyasachi Mukherjee, giving him a 24-hour ultimatum. If this objectionable and obscene advertisement is not withdrawn, then a case will be registered against him and legal action will be taken. The police force will be sent for the action."

This morning, he was quoted as saying by news agency ANI: "Sabyasachi Mukherjee has withdrawn the objectionable advertisement after my post. If he repeats such a thing, then direct action will be taken, no warning will be given. I appeal to him and those like him to not hurt sentiments of people."

Sabyasachi's is the latest made-in-India brand to blink in the face of online abuse and bigoted bullying by BJP leaders after consumer goods giant Dabur, and clothing brand Fabindia, and jewellery brand Tanishq last year.

Just this week, Dabur withdrew an advertisement for Karwa Chauth that it said celebrated inclusivity, equality and a progressive view of marriage, but also triggered a rush of harsh responses, including a crude response from the same minister Narottam Mishra.

Mr Mishra slammed Dabur for making an ad about "lesbians celebrating Karwa Chauth" and continued: "In future they will show two men taking 'feras' (marrying each other according to Hindu rituals)." He said police had been told to order the company to withdraw the ad.

The attack on Dabur came days after Fabindia was pilloried for naming its collection 'Jashn-e-Riwaaz' - because it invoked Urdu phrasing. Tyre manufacturers Ceat also faced trolling after another Karnataka BJP MP, Anantkumar Hegde, slammed the brand for an "anti-Hindu" message - urging people not to light Diwali crackers on roads.

In September actor Alia Bhatt's ad for clothing brand Manyavar was trashed because it underlined the importance of gender equality with respect to the 'kanyadaan' marriage tradition.