The entire sanitisation process will be videographed and overseen by retired District and Sessions Judge, A K S Pawar, who was appointed as court commissioner by the Punjab and Haryana High Court on Tuesday. 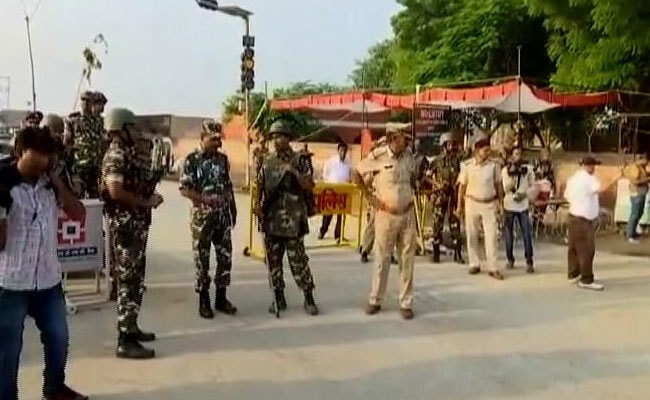 Search operations are underway in the 800 acre Dera premises in Sirsa, by 10 different teams

New Delhi/Sirsa: Authorities and security agencies have started with the second day of search and sanitisation operations inside the sprawling Dera Sacha Sauda headquarters near Sirsa town in Haryana. The entire sanitisation process at the Dera headquarters is underway and is being overseen by retired District and Sessions Judge, A K S Pawar, who was appointed as court commissioner by the Punjab and Haryana High Court on Tuesday. The search operations have led to the finding of explosives and fire crackers from inside the Dera premises. An explosives factory inside the premises has also been sealed. Two secret tunnels have also been found in the Dera premises, one of which leads from Dera chief Gurmeet Ram Rahim's living quarters to a hostel where sadhvis resided.

Sep 09, 2017 21:28 (IST)
Case filed against hospital on Gurmeet Ram Rahim's base in Sirsa for running illegal skin bank, abortion clinic and organ donation scheme.
Sep 09, 2017 16:00 (IST)
Second tunnel is covered with fiber sheets
The second tunnel is a fiber tunnel, covered with fiber sheets and mud inside the tunnel. The forensic team is digging the mud in the tunnel and trying to find out where exactly the other tunnel is leading towards.
Sep 09, 2017 14:11 (IST)
Two Secret Tunnels Found In Dera Premises
Search authorities have found two secret tunnels inside the Dera premises. One of the tunnels connects Dera Awas (Ram Rahim's living quarters) to Sadhvi Niwas (a hostel where sadhvis used to live).
"We found a window-like path leading from Dera Awas to Sadhvi Niwas. Team is investigating the same," said Mr Satish Mehra, Deputy Director of Haryana's Information and PR Department,
Another tunnel was found in Dera Awas, which is full of mud. It opened 5 km away from the Dera headquarters, which is possibly an escape route. 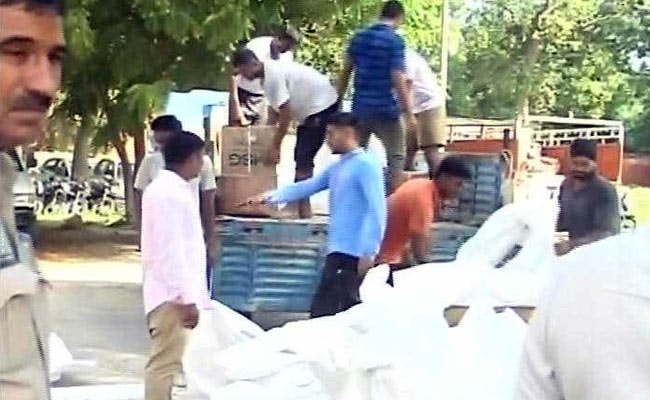 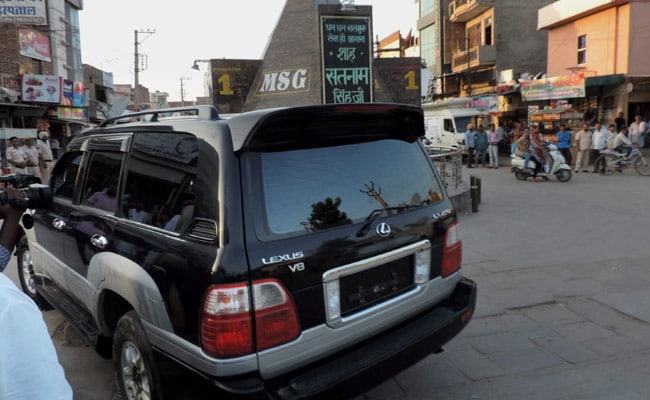 Sep 09, 2017 11:06 (IST)
Hundreds of shoes, designer clothes belonging to Dera chief Ram Rahim found
According to IANS, search teams have found hundreds of pairs of shoes, designer clothes and colourful caps belonging to the Dera Sacha Sauda Chief, Gurmeet Ram Rahim Singh.
The Dera premises have a host of amenities, including a 7-star hotel, replicas of the Eiffel Tower, Taj Mahal and Disney Palace, a cinema hall along with a shopping complex, food court, ayurvedic pharmacy, and an "international" school and hostel. All of these areas are guarded at key locations.
Gurmeet Ram Rahim's own residence inside the Dera headquarters is called the "gufa" (cave), spread over 100 acres.
Sep 09, 2017 10:42 (IST)
Explosives factory found in Dera premises, explosives, fire crackers seized
The Deputy Director of Haryana's PR Department, Satish Mehra has said that explosives and fire crackers have been seized from the Dera premises at Sirsa.
An explosives factory inside the premises has also been sealed according to the Deputy Director.
Around 82 cartons of explosives are said to have been recovered from inside the premises.

Sep 09, 2017 10:24 (IST)
Second day of "Sanitisation" at Dera's Sirsa headquarters begin
The second day of search operations or "sanitisation" as it is termed, has begun this morning, in the Dera headquarters at Sirsa. Officials conducting the search are expected to start the digging of Dera premises.
Six JCB machines are being utilised to start digging.
Throughout the night, nobody was allowed to go inside or come out of the Dera premises.
A sessions judge, along with the district collector, bankers, paramilitary forces and two fire tenders entered the Dera premises in the morning.
Four army companies, SWAT commandos and bomb squad are all on standby.
Sep 08, 2017 18:33 (IST)
Sanitisation operation continues
The sanitising operations are still ongoing, with a 1000 paramilitary troops on the Dera premises, under the supervision of former judge, AKS Pawar.
The forensic team from Roorkee is searching Dera chief Ram Rahim Singh's den, where he raped 2 women followers.
A review will be conducted late evening at around 7.30-8 PM to decide whether to resume sanitising operations tomorrow.
Meanwhile, the Lexus luxury car which was recovered from the Dera premises has been bought to Sirsa police station by the police.

Sep 08, 2017 17:43 (IST)
Five people "rescued" from Dera premises, two among them minors
Five people have been "rescued" from the Dera premises in Sirsa. Two among the "rescued" are minors, say officials.
Sep 08, 2017 14:27 (IST)
Lexus car without number, pharmacy medicines and more found in Dera Sanitisation operation
Deputy Director of Information and PR, Satish Mehra said pharmacy medicines without any labels or any brands, an Outside Broadcasting (OB) van and a Lexus car without any number have also been found during the sanitisation operation carried out by the authorities.

Sep 08, 2017 13:51 (IST)
Plastic Currency found in markets near Dera Headquarters
Plastic currency used by followers and shopkeepers alike, in the Dera campus has been found. The plastic money is used as a separate monetary system to tender change to customers.

Sep 08, 2017 13:18 (IST)
Mobile Internet Services Suspended In Sirsa District
In order to avoid the spread of rumours and misinformation as well as to prevent any disturbance in public order due to the "Sanitisation" operation underway in the Dera premises, mobile internet services have been suspended in Sirsa district.
Mobile internet services including 2G, 3G, 4G, CDMA, GPRS, SMS services and dongle services of all mobile networks have been suspended. Only voice calls from the networks can be made.
The orders have been issued under the Temporary Suspension of Telecom Services (Public Emergency or Public Safety) Rules, 2017 until the 10th of September.
Sep 08, 2017 11:48 (IST)
"Sanitisation" in Dera headquarters taking place amid tight security
The whole search operation is divided into 10 teams, led by a Superintendent of Police (SP) level official. Around 4 km of area is under curfew. Bomb squads and SWAT teams are combing the Dera premises. They are on the lookout for weapons. Out of 67 licensed weapons, only 33 had been surrendered earlier.
A review of the search operations will be conducted in the evening at around 5 PM, to decide whether search operations will need to be conducted tomorrow as well. A report on the search operations will be submitted to the Punjab and Haryana High Court.
Sep 08, 2017 11:29 (IST)
Cash, Hard Disks found inside the Dera headquarters
Cash has been found inside the Dera premises along with a few hard disks as well. Two rooms inside the premises have also been sealed. A forensic team has been called in from Roorkee to assist with the search operations.

Sep 08, 2017 11:13 (IST)
Search operations, termed "sanitisation", underway in Dera headquarters
The Dera headquarters, which cover around 800 acres, are being searched by 10 teams of security officials. JCB vehicles are stationed inside the Dera premises to search for any tunnels. There are 30 ambulances inside the premises as well. The search operation is being termed as a "sanitisation" of the entire Dera campus. Around 50 videographers are also inside the premises.
Former judge AKS Pawar, who is leading the "sanitisation", has taken around 70 witnesses with him, with many of them said to be officials from the Red Cross and other social organisations. The process is said to be going on peacefully.
Sep 08, 2017 10:48 (IST)
Curfew around Dera Headquarters in place
Heavy security has been deployed deployed in Sirsa and a curfew has been imposed around the vicinity of the Dera headquarters. Searches inside the premises have continued. The area that is to be searched is huge, around 800 acres. Around 200 workers are said to be inside the Dera premises.

Sep 08, 2017 10:14 (IST)
Court Commisioner AKS Pawar monitors search operations in Dera Headquarters
Court Commisioner AKS Pawar has reached the Dera premises. Mr Pawar was nominated by the Punjab and Haryana High Court to monitor the search operations. Authorities have called in around 10 blacksmiths to break locks around the Dera premises. Over 400 bomb squads, commandos and fire trucks are on alert for the operation.
Sep 08, 2017 09:19 (IST)
Stadium, Hospital, luxury resorts in Sirsa headquarters: Report
Gurmeet Ram Rahim's Sirsa headquarters is in itself a mini-township, housing stadium, a hospital, educational institutions, luxury resort, bungalows and markets, reported news agency IANS
Sep 08, 2017 08:57 (IST)
As many as 16 'nakas' (check points) have been set up near the Dera. A total of 41 Companies of paramilitary forces have been deployed in Sirsa district.
Sep 08, 2017 08:56 (IST)
The premises of the Dera is spread over 800 acres and houses educational institutions, markets, hospital, stadium, recreational areas and houses.
Sep 08, 2017 08:51 (IST)

Sep 08, 2017 08:51 (IST)
Hours before the search operation inside the sprawling headquarter, the sect's mouthpiece "Sach Kahoon" on Thursday admitted that human remains were buried inside the premises.
Sep 08, 2017 08:49 (IST)
His conviction led to violence in Panchkula and Sirsa in Haryana, leaving 38 people dead and 264 injured. Isolated incidents of violence were also reported from Delhi and several other places in Punjab.
Sep 08, 2017 08:49 (IST)
Ram Rahim was convicted on two counts of rape of two female disciples in 1999 by a CBI Special Court in Panchkula on August 25. He was later sentenced to 20 years of rigorous imprisonment and is currently lodged in the District Jail at Sunaria near Rohtak.
Sep 08, 2017 08:48 (IST)
Gurmeet Ram Rahim Singh, a self-styled guru with a large following, was convicted of rape last month.
Dera Sacha SaudaGurmeet Ram Rahim