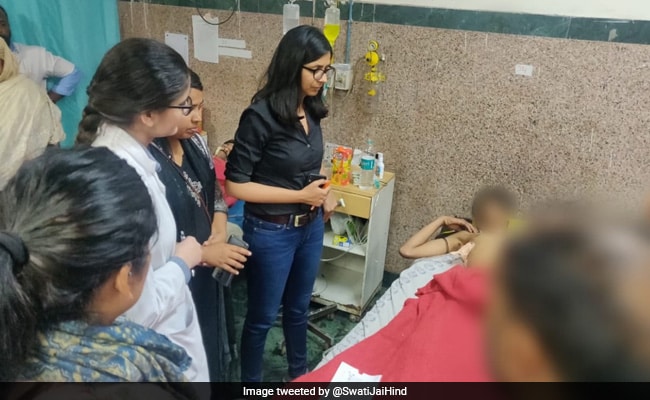 After the violence that shook the national capital, Delhi Commission for Women (DCW) chief Swati Maliwal led a delegation to meet riot victims on Thursday.

Addressing the media, Ms Maliwal said, "I met a woman who was 9 months pregnant at the time of riots. The mob thrashed her brutally and burnt her house. She gave birth to a baby boy on Wednesday. The child is the blessing of God."

Ms Maliwal said FIR would be filed and culprits be arrested in this matter.

A 90-year man was critical at Al Hind Hospital as he couldn't step out of his house for three days and had been hit by agitators in leg.

Ms Maliwal also met the family of deceased Ankit Sharma of the Chand Bagh area and assured victims all help to get justice.

The delegation also visited the Bhagirath Vihar area. According to the DCW, Bhagirathi Vihar was the only lane that didn't suffer riots as both the communities stood united against the mob, which then attacked other lanes.

"This has been one of the most painful days for me and my team. So much loss of life, limb and property. Women and girls are feeling scared. The DCW shall keep visiting the riot-hit areas and prepare a detailed report to be submitted to the Delhi and the central governments. We seek urgent action against those who instigated violence," Ms Maliwal said.

Several women and girls of the violence-hit areas demanded that the accountability of the police should be fixed in the violence.

Ahead of UP Polls, BJP Outreach To Apna Dal, Nishad Samaj