The state excise department has registered over 100 cases and arrested 20 people in this connection.

The Assam hooch tragedy is believed to be the deadliest in the country since 2011. (AFP)

As many as 45 tea plantation workers died on Sunday, pushing the death count in Assam's worst mass alcohol poisoning case in years beyond 143. At least 200 others - 17 of them critical - are still being treated at hospitals across the state, news agency AFP quoted police as saying.

Toxic liquor claims many lives across the country every year. The Assam incident occurred less than two weeks after around 100 people died in Uttar Pradesh and Uttarakhand due to hooch drinking.

"In total, 85 people died in Golaghat while another 100 are undergoing treatment," District Deputy Commissioner Dhiren Hazarika told the news agency. "The arrival of new patients slowed down only this afternoon."

Roshni Korati, Deputy Commissioner of neighbouring Jorhat, said that the death toll in his district has reached 58. "At least 160 people are undergoing treatment at local hospitals, and 16 of them are critical," he added. 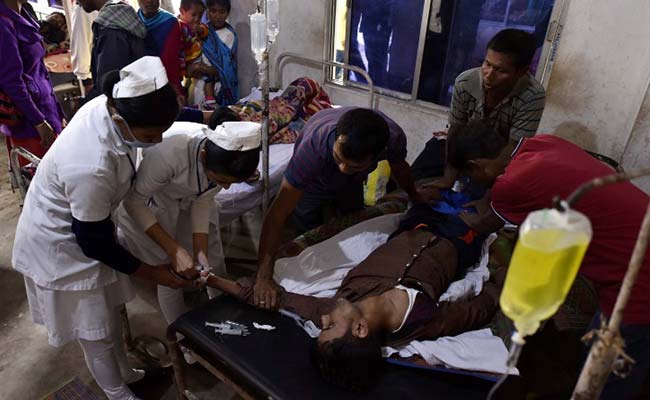 Many of those affected are still hospitalised in a critical condition. (AFP)

Assam Chief Minister Sarbananda Sonowal has ordered separate investigations into the deaths across the two districts. The state excise department has registered over 100 cases and arrested 20 people in this connection. Two officials were also suspended for failing to prevent the sale of the toxic liquor.

"Family members of people who died after drinking the liquor will be given Rs 2 lakh ex-gratia by the Assam government, and others affected by the tragedy will get Rs 50,000," S Pandey, public relations officer of the department, told news agency ANI. Over 15,000 litres of toxic liquor was also destroyed across the state, he added.

Congress chief Rahul Gandhi condoled the deaths in a Facebook post on Friday. "I am saddened by what has happened... My deepest condolences to the families of the victims. I hope that those undergoing treatment get well soon," he said.

Golaghat police suspect that the deaths in their district occurred due to liquor bought from the Salmara tea garden residence of a 65-year-old woman, Dhraupadi Oran, and her 30-year-old son, Sanju Oran. Both are already dead.

The Golaghat and Jorhat incidents are believed to be the deadliest since 2011, when 172 people were killed in West Bengal under similar circumstances.