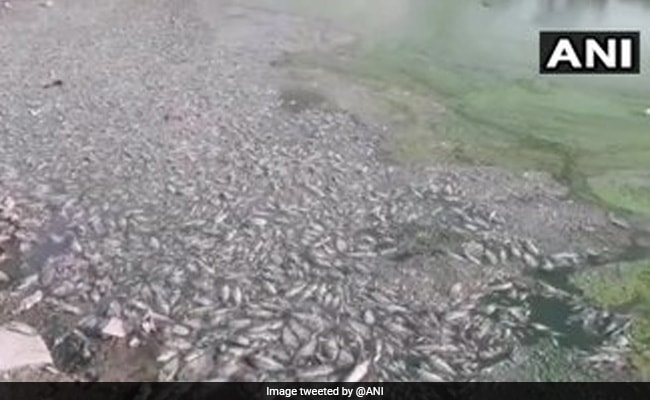 Villagers of Jodhpur's Soyla have pooled money to hire a water tanker and refill the pond.

A school of dead fish was seen floating in a drying pond at a Jodhpur village, evoking concerns about water security as western Rajasthan is currently experiencing heatwave conditions and monsoon is about a fortnight away.

A revenue officer in Soyla village said the fish died because hardly any water was left in the pond.

Villagers have pooled money to hire a water tanker to refill the pond in the hope that it may allow at least some fish to survive till the monsoon arrives.

"There's no rainfall, so water level went down and fish died. We arranged water tanker after contributing Rs. 300 each. Water is being transferred into the pond so that fish that are alive can live," the tehsildar said.

Rajasthan: Several fish found dead in a pond in Soyla village, Jodhpur. Tehsildar says, "There's no rainfall so water level went down&fish died. We arranged water tanker after contributing Rs 300 each. Water is being transferred into the pond so that fish that are alive can live" pic.twitter.com/3nWyORLeP2

Continued heatwave conditions and increased need for water in hospitals and by fire department to meet coronavirus sanitation needs have increased the pressure on water bodies, including reservoirs that supply drinking water to Jodhpur.

The Public Health and Engineering Department has had to curtail water supply from the Takhat Sagar Lake, Kaylana Lake and Surpura Dam to Jodhpur city and surrounding villages to maintain reserves till monsoon arrives.

Though the advance of the south-west monsoon in the country has been normal, its arrival in Rajasthan is expected to be delayed by around 10 days this year, the weather agency had said after assessing its data over the past 30 years.

Monsoon is likely to arrive in Rajasthan on June 25 and depart on September 27, the agency said, adding that it is likely to cover the entire state by July 8.