Dozens of homes and vehicles were set on fire in north Gujarat's Vadavali village.

Ahmedabad: The stream of mourners at the home of Ibrahim Belim has not thinned since the weekend, when a crowd of about 5,000 people attacked the main Muslim neighbourhood in the village of Vadavali in north Gujarat

Mr Belim, 50, was stabbed and killed. Fourteen others, all Muslims, were injured in the riot. Dozens of homes and vehicles were set on fire; their hollowed out, burnt cores on the streets today are a terrifying coda to the violence that lasted nearly two hours.

Mr Belim's nephew, Babubhai, was an eyewitness to his murder. He said the attackers came from a neighbouring majority-dominated Sunsar village.

"They were armed with country-made revolvers, sharp-edged weapons, and they started attacking my uncle. After killing him, they ran after me, but I ran for my life," he told NDTV.

Vadavali is located about 120 km from Ahmedabad. The communal riot broke out within an hour of a fight between Hindu and Muslim school students. 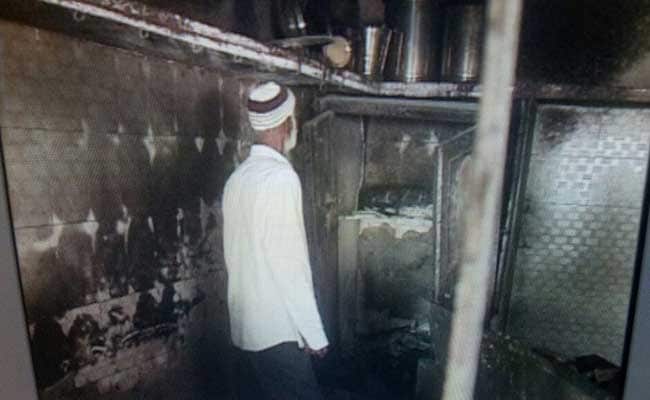 The incident in Vadavali lasted for nearly two hours.

When Ashrafbhai Sheikh spotted the raucous mob approaching on Saturday, he grabbed his family and left his house, which was burnt and looted. He claims the police did not intervene.

"The police vehicles were followed by the murderous mob and no attempt was made to stop them and all that, while they shouted slogans such as kill them," alleged Ashrafbhai.

But the police said that was not true, adding 14 people have been arrested so far on charges including arson and murder. There are another 50 odd suspects that the police wants to arrest, said officials.

"Once we got the information that the mob was approaching the village, we reacted swiftly, and contrary to the allegations, our prompt reaction prevented further casualties," said Partharajsinh Gohil, a senior officer in the area.

A Hindu man in the village of Sunsar, from where the mob arrived, has filed a police case claiming that a young girl was assaulted by a Muslim student.

The day before the violence, the 2,000 families of Vadavali gathered to choose their Panchayat, or local council, by consensus and without an election under the Samras Scheme, championed by Prime Minister Narendra Modi while he was Gujarat Chief Minister, which entitles recipient villages to special financial schemes.

Promoted
Listen to the latest songs, only on JioSaavn.com
The 300 Muslim families in the village were part of the selection process which decided to divide the sarpanch or council head's term between a Hindu and Muslim.

"Villagers live here cordially. Salim-bhai was chosen sarpanch for two and half years, and for the next period, it will be a member from the majority community,'' said outgoing sarpanch Minesh Patel.