Cyclone Phailin may be worse than Katrina, warns US meteorologist 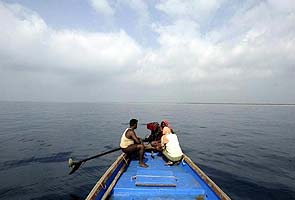 Fishermen sit on a boat in the Bay of Bengal near Gundalaba village, about 100 km (62 miles) east from Bhubaneswar

New Delhi: The weather office may be underestimating the severity of a cyclone which is hurtling towards the east coast, a meteorologist warned on Friday, adding that it could be worse than Hurricane Katrina which devastated parts of the United States in 2005.

Cyclone Phailin is forecast to hit the coast between Kalingapatnam in Andhra Pradesh and Paradip in Odisha late on Saturday with a maximum wind speed of 220 km per hour (135mph), the Indian Meteorological Department (IMD) said in its latest bulletin.

But both London-based Tropical Storm and the US Navy's Joint Typhoon Warning Centre forecast winds reaching 315 km per hour (195 mph) on landfall, classifying Phailin as a Category 5 storm - the most powerful.

"Phailin is already worse than what the IMD is forecasting. A recent satellite estimate put Phailin's current intensity on par with 2005's Hurricane Katrina in the United States," said Eric Holthaus, meteorologist for Quartz, a US-based online magazine which covers global economy-related issues.

"Everything I know as a meteorologist tells me this is the equivalent of a Category 5 hurricane - among the strongest on earth in 2013. That would mean Phailin could be the strongest cyclone ever measured in the Indian Ocean."

Hurricane Katrina hit the US Gulf coast on August 29, 2005, killing more than 1,800 people, driving 2.16 million from their homes and causing $75 billion of damage.

Cyclones in the Bay of Bengal are common at this time of year, often causing deaths, mass evacuations of coastal villages, power and telecoms disruptions and widespread damage to crops and property in eastern India and Bangladesh.

Some experts have compared Phailin with a super cyclone in 1999 that killed 10,000 people when it battered the coast of Odisha with wind speeds reaching 300 km per hour (185 mph).
Weather authorities were reluctant to make comparisons with Katrina and the 1999 cyclone, dismissing reports that Phailin is half the size of India.

"It is very difficult to compare two cyclones and their possible impacts. They are different entities and their crossing point along the coast matters a lot. At the same time, there is a resemblance in terms of intensity, so there is some similarity with the 1999 cyclone," IMD Director-General LS Rathore told a news conference.

The cyclone is pretty voluminous, but it's not half the size of the country and its radius keeps increasing and decreasing."

Holthaus said he was not familiar with India's level of disaster preparedness but was concerned that any underestimation of the storm's intensity could put lives at risk.

"I feel that IMD's underestimate of the strength and impact of this storm is potentially tragic and could catch many millions of people off guard," he said. "Anything short of a full-scale motivation may leave people stranded in flood waters. The highest possible precautions should be taken immediately."

The cyclone could disrupt the lives of millions, the Global Disaster Alert and Coordination System (GDACS) run by the United Nations and the European Commission said.

"Up to 6.1 million people can be affected by wind speeds of cyclone strength or above. In addition, 47,000 people are living in coastal areas below 5 metres above sea level and can be affected by storm surge," the GDACS website said.

Authorities began moving thousands of people living along Odisha's coastline to shelters early on Friday, as weather officials warned of extensive damage to homes, power and telecoms disruptions and flooding.

The local government cancelled workers' holidays during the popular Hindu festival of Dussehra to help prepare for the storm, and the army, navy and air force have been put on standby for rescue and relief operations.

Rations are being pre-positioned in cyclone shelters, schools and other buildings on higher ground, control rooms set up and fishing suspended.

Promoted
Listen to the latest songs, only on JioSaavn.com
Aid workers said the authorities' level of disaster preparedness and early warnings looked satisfactory.

"There has been a phenomenal change in disaster management in Odisha since the super cyclone in 1999. The action the leadership has taken is exactly what is needed," said Unni Krishnan, head of disaster response for Plan International.
© Thomson Reuters 2013