Cyclone Fani Update: According to the Meteorological department, the extremely severe cyclonic storm relatively weakened after entering coastal Odisha and transformed into "very severe" as it approached Bengal. 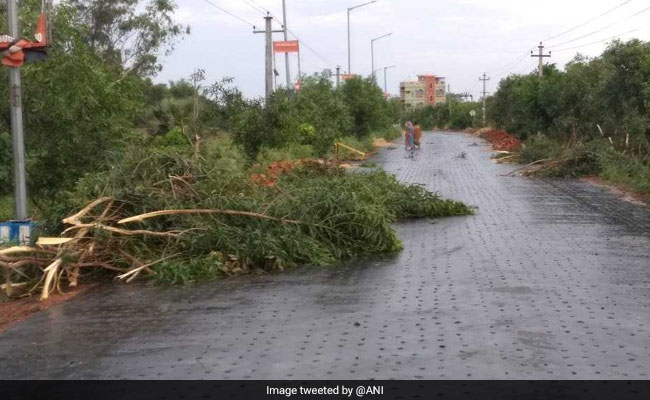 Cyclone Fani has entered West Bengal, hours after making landfall and causing havoc in Odisha on Friday. One of the strongest storms to batter the Indian subcontinent in decades, the cyclone uprooted trees and triggered rains in Bengal on Saturday night. No loss of life or any injury has been reported so far. Around 15,000 people spent last night at shelters in coastal East Midnapore district, while 20,000 people stayed at shelters in West Midnapore district.

Worst hit was Odisha where Cyclone Fani made landfall on Friday, packing winds gusting up to 200 kilometres an hour, sending coconut trees flying, knocking down power lines and cutting off water and telecommunications. Twelve people were killed in Odisha, including a teenage boy crushed under a tree and a woman hit by concrete debris.

Here are the LIVE updates on Cyclone Fani:

Read Here: Cyclone Fani Kills 16 In Odisha, Massive Restoration Effort Begins
The number of deaths in the Cyclone Fani rose to 16 in Odisha on Saturday as the government mounted a massive restoration work across 10,000 villages and 52 urban areas ravaged by the storm that pounded coastal parts of the state, affecting nearly one crore people.
May 04, 2019 20:41 (IST)
Cyclone Fani: 79 flights cancelled in North East
79 flights have been cancelled in the North East after Cyclone Fani passed over West Bengal.
May 04, 2019 19:34 (IST)
Cyclone Fani: "There was not much damage in West Bengal," says Mamata Banerjee on Cyclone Fani
Except for damaging a few huts, cyclone Fani did not cause much havoc in West Bengal, Chief Minister Mamata Banerjee said as the severe cyclonic storm weakened Saturday morning and headed towards neighbouring Bangladesh, reported news agency PTI.

While flight operations resumed at the Kolkata airport at 9.57 am, train services on the Sealdah and Howrah sections are also getting back to normal.

The Kolkata Port Trust (KoPT) also resumed its routine operation this morning at both Haldia and Kolkata docks, reported PTI.

"The entire administration was awake the whole night. We were very worried about the cyclone Fani," Ms Banerjee was quoted as saying by PTI.

Ms Banerjee had cancelled her election programmes and stayed put at Kharagpur in West Midnapore district to monitor the situation arising out of the cyclone.

Tropical cyclone Fani, which made landfall early on Friday, lost some of its power and was downgraded to a 'Depression' by the India Meteorological Department on Saturday as the storm hovered over Bangladesh."The fear of a major disaster is mostly over as (Fani) has weakened," Shamsuddin Ahmed, director of the Bangladesh Meteorological Department, told reporters, according to Reuters.
May 04, 2019 16:42 (IST)
Cyclone Fani: Odisha Chief Minister Naveen Patnaik says "a record 1.2 million people evacuated in 24 hours"
Braced for the worst after Met declared Super Cyclone Fani to hit Odisha earlier this week, Chief Minister Naveen Patnaik on Saturday said "a record 1.2 million people were evacuated in 24 hours" claiming to have carried out the "biggest human evacuation in history", according to news agency IANS.
He hailed each and every one of the 4.5 crore people involved in the entire process -- the evacuees and rescuers -- as he appreciated volunteers and officials working round the clock to pull off the feat.

Cyclone Fani was one of the rarest summer cyclones, the Chief Minister said in a press release adding that it was the first one in 43 years to hit Odisha and one of the three to hit in the last 150 years, reported IANS.

"Because of this rarity, tracking and prediction were challenging. Till 24 hours of landfall of the cyclone -- one was not sure about the trajectory it was going to take," Mr Patnaik said.
May 04, 2019 16:38 (IST)
Cyclone Fani: Navy launches rescue and rehabilitation efforts in Odisha
In the aftermath of the devastation caused by severe Cyclone ''Fani'', the Eastern Naval Command of the Indian Navy has launched a massive rescue and rehabilitation effort in Odisha, reported news agency PTI.

Two Maritime Recce sorties were undertaken by the Dornier aircraft of the Navy revealing widespread destruction localised around the temple town of Puri, according to an official statement.

The Flag Officer Commanding-in-Chief of the Eastern Naval Command personally undertook aerial survey of the cyclone affected area Saturday morning and visited INS Chilka to review the relief efforts, it said.
May 04, 2019 16:24 (IST)
Cyclone Fani: Number of dead rises to 12
The number of dead due to Cyclone Fani, which stood at eight on Friday, mounted to 12 with four fresh casualties reported from Odisha's Mayurbhanj district, officials said, adding, detailed information from many areas was still awaited, reported news agency PTI.
May 04, 2019 13:36 (IST)
1.2 million evacuated, says Naveen Patnaik
"A record of 1.2 million people were evacuated in 24 hours, 3.2 lakh from Ganjam, 1.3 lakh from Puri and almost 7,000 kitchens catering to 9,000 shelters were made functional overnight. This mammoth exercise involved more than 45,000 volunteers," says Odisha chief minister Naveen Patnaik.
May 04, 2019 12:50 (IST)
Air India announces additional flights
Air India has announced additional flights today from Delhi to Bhubaneswar and Bhubaneswar to Delhi for passengers stranded due to the cyclonic storm.
May 04, 2019 12:27 (IST)
Randeep Kumar Rana, DIG Operations of NDRF, says: "Cyclone Fani has weakened and is covering areas of West Bengal in the form of cyclone. It is further moving towards Bangladesh. The situation is under control and there is not much damaging effect. 9 teams of NDRF are present in West Bengal."
May 04, 2019 11:43 (IST)
Cyclonic storm Fani has weakened and is moving towards neighbouring Bangladesh, a senior official of the regional meteorological centre says.
May 04, 2019 11:26 (IST)
UN agency praises India on minimising loss of life
The UN agency for disaster reduction has commended the Indian Meteorological Department's "almost pinpoint accuracy" of early warnings that helped authorities conduct a well-targeted evacuation plan and minimise the loss of life as extremely severe cyclonic storm Fani made landfall near the coastal city of Puri.
"India's zero casualty approach to managing extreme weather events is a major contribution to the implementation of the #SendaiFramework and the reduction of loss of life from such events," Mami Mizutori, the Special Representative of the United Nations Secretary-General (SRSG) for Disaster Risk Reduction, and head of the Geneva-based UN Office for Disaster Risk Reduction (UNISDR), says.
May 04, 2019 10:47 (IST)
Flight operations resume At Kolkata Airport
Air India's flight to Agartala was the first one to depart from Kolkata at 9:57am.
May 04, 2019 10:19 (IST)
Around 400,000 people have been taken to shelters, Bangladeshi officials tells news agency AFP.
May 04, 2019 10:05 (IST)
PM Modi To Visit Odisha
"Day after tomorrow, on the 6th morning, I will be going to Odisha to take stock of the situation arising in the wake of Cyclone Fani," he tweets.
May 04, 2019 09:42 (IST)
Air India to resume operations at Kolkata airport from 9:45am.
May 04, 2019 09:23 (IST)
PM Modi takes stock of situation
"Spoke to Shri Keshari Nath Tripathi Ji, the Governor of West Bengal on the situation due to Cyclone Fani. Reiterated the Centre's readiness to provide all help needed to cope with the cyclone. Also conveyed my solidarity with the people of Bengal in the wake of Cyclone Fani," he tweets.

Had a discussion with Odisha Governor Professor Ganeshi Lal Ji on the situation in the state due to Cyclone Fani. Assured all possible help from the Centre to the sisters and brothers of Odisha, who are showing exemplary courage in the face of a natural disaster.

May 04, 2019 09:16 (IST)
Air India is helping people of Odisha affected by the cyclone. It says if anyone wants to send relief material to the areas affected by the storm. Air India will ship it free-of-cost.
May 04, 2019 08:53 (IST)
PM Modi says entire nation stands in solidarity
Prime Minister Narendra Modi says he has spoken to Odisha chief minister Naveen Patnaik and "discussed the situation prevailing due to Cyclone Fani."

Spoke to Odisha CM Naveen Patnaik Ji and discussed the situation prevailing due to Cyclone Fani. Assured continuous support from the Central Government in the wake of the cyclone.

The entire nation stands in solidarity with all those affected by the cyclone in different parts.

May 04, 2019 08:50 (IST)
Severe Cyclone Fani weakens into a cyclonic storm and lies centered at 60 km north west of Kolkata, says India Meteorological Department. The storm will weaken into Deep Depression and move into Bangladesh by noon.
May 04, 2019 08:37 (IST)
Cyclone Fani is the strongest cyclonic storm since the Super Cyclone of 1999, which claimed close to 10,000 lives and battered the Odisha coast for 30 hours. The Meteorological Department said it is the first cyclonic storm of such severity in April in India's oceanic neighbourhood in 43 years.
May 04, 2019 08:29 (IST)
Eight people have been killed since the cyclone made landfall in Odisha. At its strongest on Friday, Cyclone Fani reached around 185 kmph as it swept across Odisha. Over 11 lakh people were evacuated from the state.
May 04, 2019 07:59 (IST)
Cyclone Fani has now been categorised as "very severe" after it relatively weakened on entering West Bengal from remaining on "extremely severe" cyclonic storm category.
May 04, 2019 07:55 (IST)
Trees uprooted in Digha
The eye of the storm is expected to hit Kolkata before noon today.

May 04, 2019 07:53 (IST)
In the sea resort of Digha, the win speed reached 70 kmph in some areas, in Frazerganj the wind velocity was between 60 and 70 kmph. Kharagpur has so far recorded 95 mm rainfall, which will continue for the next two to three hours.
May 04, 2019 07:46 (IST)
Effects of the storm could also be felt in coastal cities like Digha, Mandarmani, Tajpur, Sandehskhali and Contai, as well as Kharagpur and Burdwan as trees were uprooted and metal hoardings gave way.
May 04, 2019 07:44 (IST)
Based on the latest weather update, flight operations are expected to resume at the Kolkata Airport from 8:00am.
May 04, 2019 07:40 (IST)
The storm is now lying close to Arambagh in Hooghly district, and is 40 km west of Kolkata.
"It is likely to continue further in north, north east direction, and reach the east Burdwan-Hooghly border, and through Nadia go to Bangladesh on Saturday afternoon, weakening into a cyclonic storm, after having triggered rains," Regional Meteorological Centre's Deputy Director General Sanjib Bandyopadhyay says.
May 04, 2019 07:39 (IST)
Rain lashes Kolkata