Ten diving and medical teams have been kept ready for augmenting rescue and relief efforts in Odisha and West Bengal. 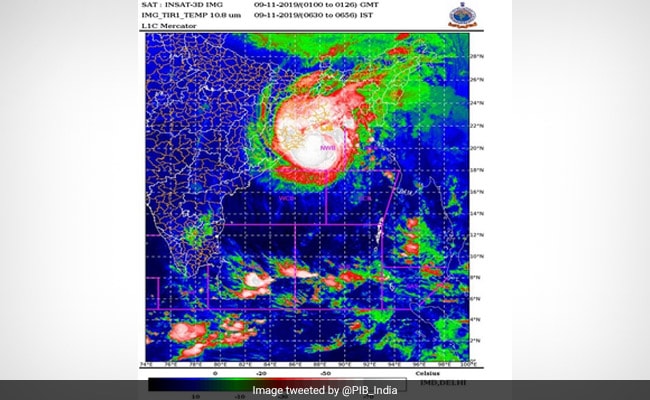 The Indian Navy has kept on standby its aircraft and three ships for immediate deployment in the eventuality of any damage by severe cyclonic storm Bulbul, which is expected to make a landfall by the midnight of Saturday, a Ministry of Defence spokesperson said.

The spokesperson said the Eastern Naval Command (ENC) was closely monitoring the movement of the cyclonic storm as it goes northward.

"Naval aircraft deployed in the Bay of Bengal have been warning fishing boats about the impinging cyclone and advising them to return to the nearest harbour for shelter," the spokesperson said.

"Three Indian Navy ships are on standby in Visakhapatnam with relief material embarked for immediate deployment to the most affected areas to undertake relief and rescue operations."

Ten diving and medical teams have also been kept ready for augmenting rescue and relief efforts in Odisha and West Bengal.

The Naval aircraft are kept ready at Naval Air Station, INS Dega to undertake aerial survey of the most affected areas, casualty evacuation and airdrop of relief material as required by the state administrations.

"Naval Officers-in-Charge, West Bengal and Odisha are in constant liaison with respective state administrations for rendering assistance as required," the spokesperson added.

In an update on the cyclone at 11:30 am, the Regional Meterological Centre here said the storm is now located 110 kilometres south-southwest of the coastal resort of Digha in East Midnapore and Sagar islands in 24 Parganas South districts in West Bengal.

As for Odisha, the storm is now 120 kilometres east-southeast of Chandbali in Bhadrak and 125 kilometre east-northeast of Paradip in Jagatsinghpur districts.

The storm is likely to weaken gradually and move northeastward and cross West Bengal-Bangladesh coasts between the Sagar island and Bangladesh's Khepurpara across Sundarban delta by Saturday midnight as a severe cyclonic storm with a maximum sustained wind speed of 110-120 kilometres per hour, gusting to 135 kilometre per hour.