Moved by the plight of the distressed, CRPF ASI Padmeswar Das discussed with his mother and wife about the possible help they could extend and they enthusiastically joined him in the endeavour. 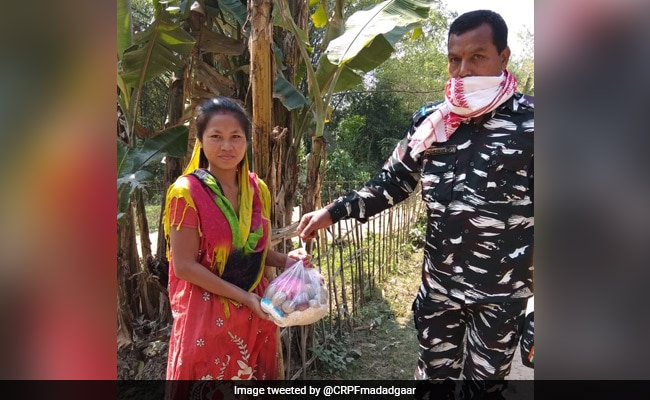 CRPF ASI Padmeswar Das said he used his uniform for the service of the people.

CRPF ASI Padmeswar Das is on leave at his home in Assam but he is not off-duty as he prepares ration packets, using his savings, for the poor in his village who are worst hit by the coronavirus lockdown.

The 48-year-old trooper, whose unit is deployed in south Kashmir's terrorist violence-hit Shopian district, is helping those affected by the lockdown in his tiny village of Chatanguri, about 76 kms from the district headquarters of Morigaon district.

Moved by the plight of the distressed, Mr Das discussed with his mother and wife about the possible help they could extend and they enthusiastically joined him in the endeavour.

"I came home for my scheduled leave on March 3 and by the time I was supposed to return, the lockdown was declared in the country. My unit based in Kashmir valley also sent in a message asking me to stay put and not return."

"Had I been with my force, I would have had an army of my colleagues and officers to help the needy. Then I thought I can be one-man army," Mr Das told PTI over phone from his village.
"My force stands for the motto 'service and loyalty' whether a jawan is alone or in a group," he said.

The Assistant Sub Inspector (ASI), who joined the CRPF as a constable in 1991, said he took his scooty and went to the nearest market to fetch about 80 kg of rice and other dry rations.

The next day he and his family prepared over 50 packets containing 2 kgs of rice, 1 kg potato, a small bottle of mustard oil, a packet of salt, onions and half kg pulses in each.

"I spent about Rs 8,000-10,000 for purchasing and packing these items," Mr Das said hesitatingly as he does not seem keen to share the cost of his noble deed.

Mr Das said he used his uniform for the service of the people.

"I donned my uniform as movement of civilians was barred due to the lockdown, used my ''gamocha'' (traditional Assamese scarf) as a mask and got a handcart to distribute the packets among the needy.
When reminded that he acted like a good samaritan, Mr Das says he only knows that "efforts of any kind always count".

"My colleagues in my delta company unit in Shopian and in the entire force are spread out to help in fight against coronavirus and the lockdown affected people in whatever way they can. I am just one among them," Mr Das, who has a young son and daughter, said.

His boss and Commandant of the 76th battalion of the force (based in Jammu) Neeraj Pandey is all praise for his "tough and dedicated" colleague.

"I am proud of what Das did to help people despite being on official leave. He has gone beyond his call of duty but that is what our ethos and regimentation are all about," Neeraj Pandey said.

Unfazed by the continuing lockdown, Mr Das plans to replenish the stocks for those who need his help again.