Among those who attended were politicians from Congress, BJP and celebrities like actor Ashutosh Rana. 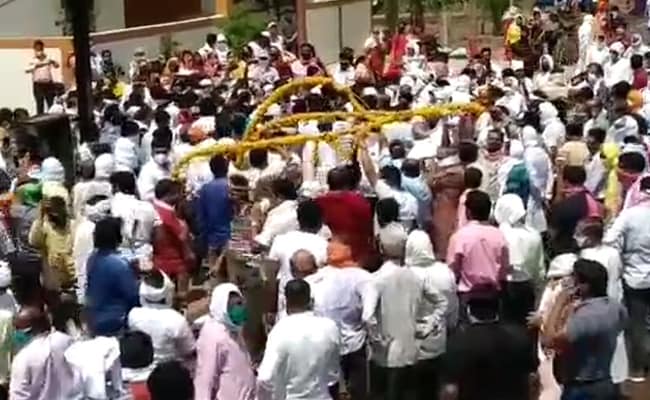 Thousands of people attended the funeral of a renowned spiritual leader in Madhya Pradesh's Katni despite lockdown rules. Among those who attended were politicians from Congress, BJP and celebrities like actor Ashutosh Rana. The district administration, however, said there was no violation of the lockdown protocol.

Dev Prabhakar Shastri, 82, popularly known as 'Daddaji', died on Sunday from lung and kidney ailments. He was undergoing treatment in Delhi and was brought to Madhya Pradesh by Mr Rana and former state minister Sanjay Pathak after his condition deteriorated.

Hundreds of people are seen in social media videos walking in groups at the funeral procession.

"There was no violation. It was all regulated, social distancing was maintained," said Katni District Collector Shashi Bhushan Singh, before disconnecting NDTV's call.

Assemblies have been banned across the country since March, when the centre first announced nationwide lockdown to arrest the growth of coronavirus cases in the country.

The centre on Sunday extended the lockdown till May 31. In its guidelines to states, it mentioned that funerals with not more than 20 people can be allowed.

On Monday, in a circular to states, the centre clarified that states can make lockdown more stringent if they wished to, but it cannot be diluted.